A familiar scenario from the early universe is getting a tune-up. It’s long been believed that cosmic dust was first produced by supernovae, becoming the essential building block for the formation of planets. New work using the Spitzer Space Telescope suggests a second mechanism that complements the first. So-called ‘carbon stars,’ stars late in their lives and similar to red giants but containing more carbon than oxygen, may have played as significant a role as supernovae themselves.

The work focused on the carbon star MAG 29, some 280,000 light years away in the Sculptor Dwarf galaxy. Says Albert Zijlstra (Jodrell Bank Centre for Astrophysics):

“All the elements heavier than helium were made after the Big Bang in successive generations of stars. We came up with the idea of looking at nearby galaxies poor in heavier elements to get a close-up view of how stars live and die in conditions similar to those in the first galaxies.” 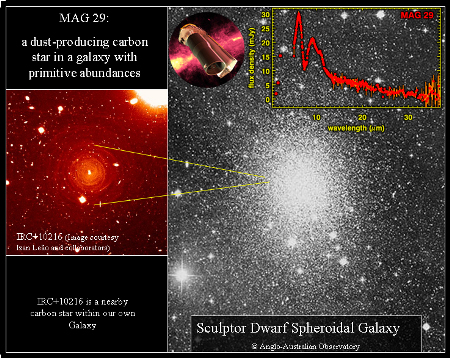 This look back in time could offer clues to the formation of our own world. The existence of carbon stars in early galaxies was thought unlikely until now, but MAG 29 is found in a galaxy that contains only four percent of the carbon and other heavy elements seen in the Milky Way. It’s similar, in other words, to the primitive galaxies under active investigation at the far reaches of the universe. Learning how carbon stars contribute to dust in ancient galaxies should firm up our understanding of how these stars and their galaxies evolve. Thus Gregory Sloan (Cornell):

“We haven’t seen carbon-rich dust in this primitive an environment before. What this tells us is that carbon stars could have been pumping out dust soon after the first galaxies were born.”

It’s also interesting that MAG 29 is exceptionally rich in hydrocarbons, vital components of life’s appearance. Once again we look at phenomena in the distant universe whose chemical signature reminds us of the factors that produced life on our own planet. If we’re not inside a cosmos that is teeming with life, the real problem may be explaining why not. But is intelligence a natural outcome, and does it invariably lead to technology?

The paper in Science appears as the International Year of Astronomy launches with opening ceremonies at UNESCO headquarters in Paris. Science‘s own cover marking the event is a spectacular Spitzer image of dust clouds in the center of the Milky Way. The carbon star paper is Sloan et al., “Dust Formation in a Galaxy with Primitive Abundances,” Science Vol. 323, No. 5912 (January 16, 2009), pp. 353-355 (abstract). A Science & Technology Facilities Council news release is also available.