Understanding how galaxies form is no easy matter, particularly when you factor in dark matter. Without a firm knowledge of what dark matter actually is, we’re limited to discussing its perceived effects, something that researchers at Hebrew University of Jerusalem have coupled with computer simulations that change how we view the early universe.

The large galaxies some three billion years after the Big Bang apparently didn’t form from the merger of smaller disks of material, says this team. That earlier theory would have seen slow star formation as the various disks eventually came together. But the latest observations show that early galaxies created stars at a rapid rate. The new theory may explain why. It sees galaxies forming as the result of cold hydrogen flowing in narrow streams along the filaments of the so-called ‘cosmic web’ that defines the large scale structure of matter in the universe.

These hydrogen streams would feed into the halos of dark matter that are believed to enshroud the forming galaxies, helping the emergence of a rotating disk at the center. The computer models show that this continuing infall of cold gas produces a scenario that promotes star formation. 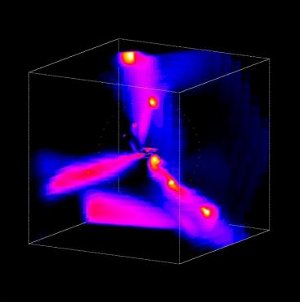 In fact, the Hebrew University team has worked out a physical theory that traces the formation of gas clumps in the early disks and shows how such cosmic streams could drive them. What’s especially interesting is that the theory offers a way to explain the formation of elliptical galaxies in the early universe. These are the galaxies, far more rounded in shape than spirals like the Milky Way, that house predominately old, red stars.

It’s fascinating stuff, incorporating as it does the latest thinking on dark matter. But it’s also a reminder of how much we still have to learn about dark matter itself as we put these simulations to further tests. What breakthroughs may lie ahead as we continue to study what this mysterious ‘stuff’ is will keep us pursuing dark matter stories in these pages.