In the market for a mammoth starship? Recently released work by Friedwardt Winterberg, discussed here by Adam Crowl, points to fast interplanetary travel and implies possibilities in the interstellar realm that are innovative and ingenious. Adam notes in an e-mail that Winterberg’s drive has certain similarities to MagOrion, a system that in its earliest iteration combined a magnetic sail with small yield nuclear fission devices. Dana Andrews and Robert Zubrin first published that concept in 1997 and it has been evolving in the years since, but Winterberg’s work takes the idea into the realm of what may be a truly workable fusion design. Read on as we follow up our earlier story on Winterberg with a much deeper look.

Friedhardt Winterberg has worked on inertial confinement fusion since 1954 and was extensively involved in developing new fusion devices during the Cold War alongside bomb-makers like Edward Teller. Much of his non-fission triggering work was classified, but his declassified suggestions in 1970 for setting off fusion reactions via electron beams were adopted by the British Interplanetary Society’s “Daedalus” starprobe study, with all that implies for the interstellar community. However, Winterberg says in his new papers, electron beams just won’t work when triggering deuterium reactions. This is an important point. Bombs have typically used deuterium-tritium (D-T) reactions, but these release 80% of their energy as neutrons – useless for rockets and problematic for power generation. Pure deuterium (D-D) reactions are a better option and have been successfully triggered in bombs – the 15 megaton “Mike” test is one example – but they require a more intense burst of energy to cause a sufficiently rapid and energetic collapse to produce fusion in the target material. Something like a gigajoule of energy must be concentrated on the deuterium target within less than a tenth of a micro-second to produce fusion and not merely blow the target apart in a puff of hot gas.

How to do so with present day technology and apply it successfully to rockets requires overcoming some serious problems. An intense proton-beam sufficiently rapidly acting to cause the fusion-making implosion has a beam-power of an unprecedented 10 petawatts (10,000 trillion Watts.) For it to rise to full power sufficiently rapidly – in less than a 1/10th of a microsecond – a voltage of a billion Volts is needed, which in a terrestrial laboratory would cover the machinery in gigantic sparks due to insulation breakdown of the surrounding air. How to avoid such wasteful artificial lightning?

In a vacuum the issue is less serious. Large voltages can be maintained by firing off charge as electron beams or small charged pellets. Winterberg imagines a spaceship wrapped in a set of superconducting coils to maintain the gigantic charge needed and create a magnetic mirror. Then a laser beam blasts a plug of solid hydrogen in the fuel target producing a jet of protons as a bridge between the ship and the target. This allows the massive charge of the ship to discharge as the desired high-energy proton-beam with sufficient power to collapse the deuterium fuel. The resulting fusion explosion produces a huge plasma wave that the ship’s magnetic mirror now deflects, transferring momentum from the plasma to the ship. Winterberg also discusses a means of triggering the same reaction in an atmosphere – via ultraviolet argon lasers. 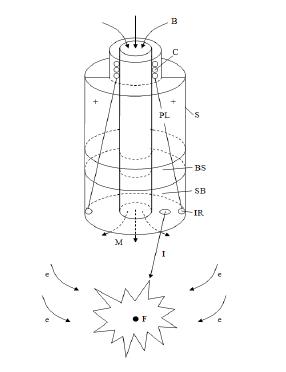 Winterberg is very critical of current efforts to compress fusion fuel via lasers because to be sufficiently energetic the lasers would be destroyed in the process. Winterberg turns this problem into a virtue by using an explosion-pumped laser-beam – a shaped cylinder of hexogen explosive detonates at 8 km/s and compresses a rod of solid argon, thus pumping its atoms into a UV laser-emitting state. This intense UV laser-beam then compresses a deuterium-tritium fuel target that in turn causes a bigger D-D fusion explosion. All this now rapidly expanding plasma, plus air sucked into the reaction chamber, now explodes out the rocket nozzle as a high-speed exhaust.

So what sort of performance is expected? Winterberg’s interplanetary vehicle has an exhaust velocity of 100 km/s, while the launcher vehicle gets 10 km/s. Sufficient to industrialise the Solar System, Winterberg’s stated goal, but what of interstellar travel? Small fusion bombs in the right casing can trigger bigger explosions, thus potentially we have the makings of (large) starship fusion-triggering system.

Imagine an Orion or even Daedalus style vehicle, large enough to magnetically contain the fusion explosions more efficiently than the external fusion system Winterberg describes. To get the high performance fusion plasma need for starflight most of the propellant plasma has to be products of the reaction, not incidentals like the disintegrated argon laser or the fusion target chamber that contains the deuterium. The more diluted the mix, the slower the exhaust. Very large bombs are less diluted, but need larger vehicles to contain their blast. Thus Winterberg style starship-building potentially necessitates the gargantuan.

Next post: A Science Fictional Take on Being There