Beginnings of a Brown Dwarf Census

Just how common are brown dwarfs? The answer is still up for debate, for stars like these (with masses less than 0.05 that of the Sun) are so small that they do not burn hydrogen, and as they age, they become more and more difficult to detect. But we’d like to know more, especially in understanding our local interstellar neighborhood. Red dwarfs are common throughout the galaxy, and we know that they can support planetary systems and even worlds in the habitable zone. Is it possible that brown dwarfs are even more numerous than red dwarfs?

Asking questions like these takes us into what is known as the initial mass function (IMF), which involves the number of stars versus their masses at the time of their formation. The place to study the issue is a star forming region like the one shown in the image below. This Subaru Telescope composite shows the W3 Main region, about 6,000 light years away in the constellation Cassiopeia. A region like this is helpful because the majority of stars within it formed at roughly the same time, unlike a more random sampling of stars from elsewhere. 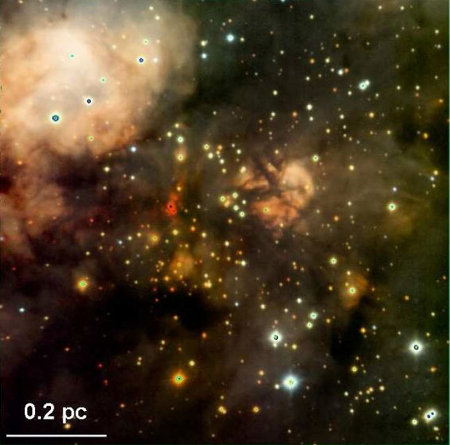 Image: Tricolor composite image of W3 Main where massive stars are being born. Red colored objects to the left of center are extremely young massive stars, surrounded by less massive stars of one million years old. Nebulae with a variety of colors and appearances are ionized gas reflecting light from these stars. Filamentary dark clouds are also conspicuous. The line at bottom left shows a scale of 0.2 parsecs, which is approximately 40 thousand astronomical units. Credit: Subaru Telescope/NAOJ. 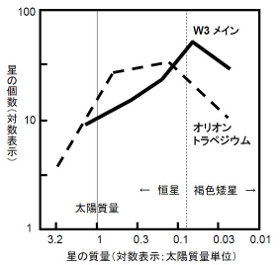 Low-mass star forming regions like Taurus may skew the broader picture, for it’s not known whether clusters of massive stars would show the same proportion of smaller stars among them. Thus the need for the Subaru study of W3 Main, which produced an image the observatory is calling “…the deepest and finest image from a ground-based telescope among the images of massive star forming regions.” The work points to a substantial number of brown dwarfs in the region. But it also finds that this distribution is significantly different from regions like the Trapezium cluster and IC 348, where a much smaller percentage of brown dwarfs have been identified in earlier studies.

Image: Stellar census showing population according to weight. The horizontal axis is the mass in the unit of the solar mass in log scale, while the vertical axis is the number of stars in log scale. In the W3 Main region (thick line), the population increases toward the less massive stars down to brown dwarf masses, indicating the abundance of the brown dwarfs in this region. Note that the turn over is in the more massive range in the Orion Trapezium cluster region. Credit: Subaru Telescope/NAOJ.

Our brown dwarf question, then, is still unanswered, but we’re making progress. This paper, which is to run in February in the Astrophysical Journal, takes our study of the initial mass function down below the hydrogen burning limit, and points to future work that will help us determine the prevalence of brown dwarfs in our galaxy. The paper is Ojha et al., “Young Brown Dwarfs in the Core of the W3 Main Star-Forming Region,” available online. A Subaru Telescope news release is also available.