It would be helpful if space were a bit more empty. A key problem facing an interstellar probe would be encounters with dust in the planetary system it leaves and, as it reaches cruising speed, dust impact in space between the stars. Although our Solar System seems to be in an unusually sparse pocket of space, the galaxy-wide distribution of hydrogen is roughly one atom per cubic centimeter. Dust — bits of carbon, ice, iron compounds, and silicates — is far rarer still, but enough of a factor to a ship moving at a significant fraction of the speed of light that the designers of the Project Daedalus craft built in a payload shield 32-meters in radius to protect their starship.

Then again, much depends on your location. Have a look at the image below. It’s an area called the Red Rectangle some 2300 light years from Earth in the constellation Monoceros. Although the center of the image seems to be a single star, it’s actually the double star system HD 44179. The Red Rectangle is a nebula, a cloud of gas and dust that shows what can happen when we move into areas of intense dust concentration. You can imagine that movement through an environment like this one would demand serious shielding requirements for any craft on a mission of interstellar exploration. And although we can avoid nebulae, any interstellar flyby probe has to reckon on the gas and dust within its destination system as it screams through to study the inner planets. 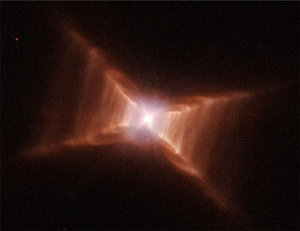 Obviously, we’d like to know more about dust, and that’s a problem. Donald York (University of Chicago) states the matter baldly, saying of interstellar dust “We not only do not know what the stuff is, but we do not know where it is made or how it gets into space.” York and collaborators have been studying the Red Rectangle looking for clues, and they’ve turned up a workable hypothesis.

Image: A Hubble Space Telescope image of the Red Rectangle. What appears to be the central star is actually a pair of closely orbiting stars. Particle outflow from the stars interacts with a surrounding disk of dust, possibly accounting for the X shape. This image spans approximately a third of a light year at the distance of the Red Rectangle. Credit: Credit: NASA; ESA; Hans Van Winckel (Catholic University of Leuven, Belgium); and Martin Cohen (University of California, Berkeley).

One of the stars at the heart of the Red Rectangle nebula has burned through its initial hydrogen, collapsing upon itself until it could generate the heat to burn helium. Such stars go through a period of transition that, in a matter of tens of thousands of years, causes the star to lose an outer layer of its atmosphere. The thinking is that dust forms in this cooling layer and is then pushed out from the star by radiation pressure, along with large amounts of gas. The larger star in the Red Rectangle is too hot to concentrate dust in its atmosphere, but double-star systems like this one often show a disk of material forming around the second star, creating a jet that blows dust out into the interstellar medium. Here’s Adolf Witt (University of Toledo) with more detail:

“Our observations have shown that it is most likely the gravitational or tidal interaction between our Red Rectangle giant star and a close sun-like companion star that causes material to leave the envelope of the giant. The heavy elements like iron, nickel, silicon, calcium and carbon condense out into solid grains, which we see as interstellar dust, once they leave the system.”

Take the Red Rectangle process and make it ubiquitous and you’ve located one source for the dust that is such a factor in interstellar space. Back to Daedalus, which was designed to move at 12 percent of lightspeed for the fifty year journey to Barnard’s Star. Along with its beryllium shield for the cruise phase, Daedalus would have needed additional protection for the stellar encounter, which designer Alan Bond suggested could take the form of a cloud of dust deployed from the main vehicle, heating and vaporizing any larger particles before they could damage the payload. And because Daedalus would deploy smaller probes within the system, each would need a cloud of its own.

Gregory Matloff and Eugene Mallove once suggested that a starship could use, in addition to a shield, a high-powered beamed energy device to destroy or deflect any larger objects in its path. So the options for interstellar protection are slowly being placed on the table. But first we have to learn more about the nature of the problem, which means studies like these that tell us how dust forms in the first place. The paper is Witt et al., “The Red Rectangle: Its Shaping Mechanism and its Source of Ultraviolet Photons,” accepted for publication in the Astrophysical Journal and available online. A University of Chicago news release is available.