Cosmic inflation, first proposed by Alan Guth (MIT) in 1979, seems about as intractable a subject as dark energy. How to study it? Inflation does something mind-bending to spacetime by making it expand far faster than the speed of light. Oddly, this doesn’t contradict anything Einstein said, because while nothing we know can travel faster than light through spacetime, there is no restriction implied in these equations on the expansion of spacetime itself. This is why Miguel Alcubierre’s ‘warp drive’ notions can fit within an Einsteinian universe.

After all, what Alcubierre proposed in his 1994 paper was that a spacecraft that could create the right kind of spacetime distortion would at no point in its journey go faster than the speed of light. Compressing spacetime in front while expanding spacetime behind, it would itself remain within a ‘bubble’ of normal spacetime. Of course, the amount of energy required to achieve this feat (and it’s negative energy, at that) may render the Alcubierre drive nothing more than a theoretical construct for we Kardashev Type 0 civilizations, as more than a few theorists have pointed out (more on this in the archives, if you’re interested).

But can we be sure that inflation happened in the early universe? Finding its traces would be a breakthrough of no mean proportion. One group trying to do just that is working with data from the South Pole Telescope (SPT), searching for evidence that comes in two forms, the first the result of fluctuations in the density of subatomic particles. Take the tiniest such fluctuation and write it large through the instantaneous power of inflation and you should see traces in the structure of the universe. Such fluctuations, says Scott Dodelson (University of Chicago) are common and, as presently understood, fit with inflation theory:

“Usually they’re just taking place on the atomic scale. We never even notice them. That picture [of a sudden stretching into cosmic proportions] actually works. We can calculate what those perturbations should look like, and it turns out they are exactly right to produce the galaxies we see in the universe.”

But such observations aren’t enough, for there are other ways to explain the early universe. To pin down a hot Big Bang emerging from a quantum fluctuation, something else is needed, and in the case of the SPT work, that something is gravity waves. Inflation would have stretched them to cosmic proportions as well, which is why the SPT team is building a highly sensitive polarimeter to attach to the telescope. Operating at submillimeter wavelengths, the instrument may be able to make the crucial gravity wave detection some time during the next decade. 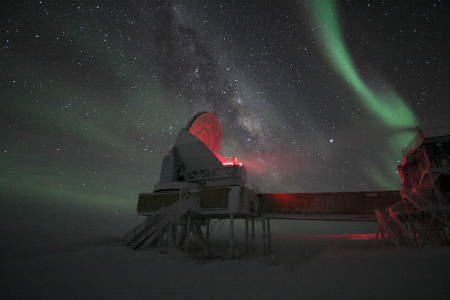 I’ll be fascinated to learn what Alan Guth says about this ongoing investigation. Guth shares a platform today with Dodelson and University of Chicago astronomer John Carlstrom at a three-hour session at the American Association for the Advancement of Science’s annual meeting in Chicago. Inflation, dark matter, and dark energy offer potent reminders of how much we have to debate at such meetings. “We have these key components to our picture of the universe, but we really don’t know what physics produces any of them,” adds Dodelson. “The goal of the next decade is to identify the physics.” It’s shaping up to be quite a decade.