STEREO: Into the Lagrangian Points

I love it when we find uses for instruments that they were never intended for. In deep space terms, we can go back to Voyager 2, which carried a plasma wave instrument that was designed to measure the charged particles inside the magnetic fields of the gas giant planets it would pass. Voyager 2 was able to tell us much about dust impacts on a fast-moving spacecraft when it was realized that the plasma wave instrument would be able to sense the plasma created by vaporized particles. In other words, the instrument became a de facto dust detection device.

Now I see that the two STEREO spacecraft may be pressed into service to study what’s lurking in the L4 and L5 Lagrangian points, each 150 million kilometers from Earth, with L4 60 degrees in front of our planet and L5 60 degrees behind. Balancing the gravitational field of the Sun with that of Earth, the Lagrange points are interesting places, possibly a junkyard of debris from the early Solar System. It’s known that such points appear around other planets, as witness the thousand or so asteroids that make up the Trojans at Jupiter’s L4 and L5 points. 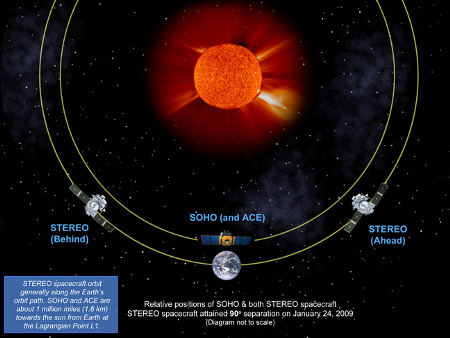 Launched in 2006, the STEREO spacecraft were designed to monitor solar storm activity, one of them moving ahead of the Earth in its orbit, the other behind. But as they gradually move through L4 and L5, their heliospheric imagers can be put to work looking for asteroids. New Scientist has just run a story on the prospect, going on to speculate on an audacious idea put forth by Richard Gott (Princeton), who believes a whole population of objects may be found in these intriguing areas.

Addendum: The statement above turns out to be in error. The concept actually originated with Edward Belbruno at Princeton, and resulted in a paper for which he was lead author. That paper is Belbruno, “Where Did The Moon Come From?” Astronomical Journal, Vol. 129, No. 3 (March 2005), pp. 1724-1745 (available online). Dr. Gott was co-author on this work.

Gott wonders whether a large object of the sort believed to have struck the Earth some four billion years ago, thus creating the Moon, may have grown up close by, gradually nudged out of one of the Lagrangian points into collision with our planet. It’s worth considering, since as the New Scientist article points out, an incoming Mars-sized object from elsewhere in the Solar System would have struck the Earth with so much energy that it would have destroyed it. That and the makeup of oxygen isotopes found on the Moon — the same as on Earth — hints that the impactor must have formed in nearby space. From the article:

Gott thinks that any objects still in L4 and L5 may be leftovers from the formation of that impacting body. “Let’s say that you find a number of objects there. In that case, they would be great targets for a sample-return mission to see if they had the same oxygen isotope abundances as Earth,” says Gott. If they do, Gott believes this strengthens the case for the Earth-impactor to have formed there.

Back to that dust issue — the STEREO vehicles have been seeing a wide variety in dust impacts, from just a few up to several thousand per day. What will STEREO’s heliospheric imagers find at the L4 and L5 points? Earth-based telescopes have yet to find asteroids there, so the current thinking is that any that do lurk in the regions are small, less than a kilometer across. But if Gott is right, even a few lucky finds could be fodder for a future mission, one that would give us new insight into the early history of the Solar System.