Gamma-Ray Burst Exceeds All Others

Adam Goldstein must be living right. Here’s a grad student (University of Alabama, Huntsville) who’s on his first day on the job working with the Fermi Gamma-ray Space Telescope. He’s given the task of monitoring the Gamma-ray Burst Monitor (GBM) instrument, which routinely detects bursts, about one a day. This time, though, when the phone rings, it is to flag a burst like no other, 700 times longer in duration than the average. 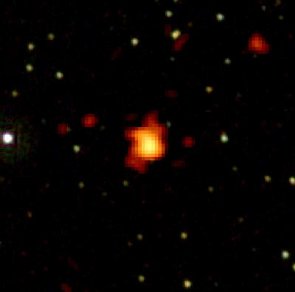 Valerie Connaughton (UAH), a member of the GBM team, says this about the burst:

“This is the most spectacular burst ever seen at high energy. If the event that caused this blew out in every direction instead of being a focused beam, it would be equivalent to 4.9 times the mass of the sun being converted to gamma rays in a matter of minutes.”

But it’s not just the power of the burst that is worth noting. GRB 080916C lasted for 23 minutes, implying (at the specified distance) that the actual event was four minutes in duration when it occurred. What processes produce this kind of gamma-ray activity? Moreover, rather than starting with high-energy gamma rays, the early detection here was on the low-energy side, with the high-energy gamma rays not showing up until five seconds into the event. The cooler gamma rays faded out early on but the high-energy rays persisted for an additional twenty minutes. Why?

“This one burst raises all sorts of questions,” says Peter Michelson (Stanford). “In a few years, we’ll have a fairly good sample of bursts, and may have some answers.”

Those answers could give us insights into the environment around gamma-ray bursts, which includes stellar debris, a black hole and massive amounts of radiation. They might also give us a read on theories of quantum gravity that suggest empty space is actually a froth of quantum foam, one that would allow lighter, lower-energy gamma rays to move more quickly than their higher-energy cousins. Future observations to study unusual time lags like these should help us pin down a plausible explanation.

Next post: Edwin Salpeter and the Gasbags of Jupiter