Edwin Salpeter and the Gasbags of Jupiter

‘The Gasbags of Jupiter’ sounds for all the world like the title of an early 1930s novel that would have run in a venue like Science Wonder Stories. In fact, as Larry Klaes tells us below, the idea grew out of Carl Sagan’s speculations about free-floating life-forms that might populate the atmospheres of gas giant planets like Jupiter. Cornell physicist Edwin Salpeter had much to do with the evolution of that concept, helping Sagan produce a paper that was a classic of informed imagination (and one that led to numerous science fiction treatments as the idea gained currency). Larry’s celebration of Salpeter’s life gives a nod to that paper but also notes his deep involvement in the study of the most distant celestial objects.

On March 14, the Department of Astronomy at Cornell University will commemorate the life of one of their most prestigious faculty members: Edwin E. Salpeter, the James Gilbert White Distinguished Professor of Physical Sciences Emeritus. Salpeter died of leukemia last November 26 at his home in Ithaca, just before his 84th birthday.

At the Heart of the Quasar

The biographies on Salpeter, who came to Cornell in 1948, primarily mention his work in the astrophysics of distant cosmic objects. As just one example, Salpeter was among the first scientists to come up with the current explanation for the enormous energies from quasars, which is short for QUAsi-StellAr Radio sources. The cores of these very distant galaxies contain supermassive black holes which collect vast amounts of debris that are pulled into fast-spinning accretion disks around these gravitational wells. 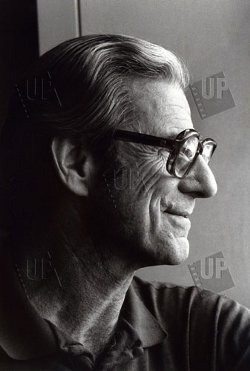 So much debris falls onto these black holes that it is often ejected back into deep space in relatively tight beams known as relativistic jets, which shoot out across intergalactic space for many thousands of light years. Quasars are some of the most luminous objects in the Universe and thanks to Salpeter’s work on understanding their nature, astronomers have a much better idea how these distant bodies are such powerhouses.

But perhaps the most recognized work of Salpeter is, ironically, one that many probably do not know he was involved with, or that his collaborator was one of the most recognized names and faces in science: The late Cornell astronomer Carl Sagan, who died in December of 1996 from myelodysplasia, a rare form of leukemia.

Among Sagan’s many and varied interests, perhaps his favorite was extraterrestrial life. Sagan was one of the pioneers who brought about the acceptance by the mainstream science community of the possibility that beings of all kinds existed beyond our planet Earth. He would often speculate on alien life on worlds and in realms few had considered at the time.

One of Sagan’s truly revolutionary ideas about aliens was the concept of creatures that dwelled not on or in the surface of some Earthlike planet but spent their entire lives floating in the atmosphere of giant gaseous worlds such as Jupiter, which could hold over one thousand Earths. Unlike the inner terrestrial worlds such as Venus and Mars, Jupiter and its fellow giants are made up primarily of atmospheric gases, though the incredible pressures in these worlds’ lower layers of air turns the hydrogen in them into a metal.

Sagan thought that since the upper atmosphere of Jupiter was relatively friendlier by comparison and contained many complex organic molecules, they may have had time in the five billion years since the formation of the Solar System to turn out some type of life, an aerial form of creature that never touched or knew a planetary surface.

To determine just how scientifically plausible such aliens might be, Sagan asked his colleague Salpeter to help him produce a paper on the subject which was titled “Particles, Environments, and Possible Ecologies in the Jovian Atmosphere.” The paper first appeared in the prestigious The Astrophysical Journal Supplement Series in late 1975.

Sagan and Salpeter envisioned three main types of Jovian creatures. There were sinkers, small organisms which were constantly falling towards the deadly deep, dense, and hot layers of the planet but always managed to survive long enough to produce offspring that would stay up in the more habitable air layers to repeat their cycle of life. The other aerial residents of Jupiter were known as floaters, which Sagan would later describe as being “kilometers across, enormously larger than the greatest whale that ever was, beings the size of cities.” Floaters were seen as drifting across the vast alien sky in great herds, looking like a collection of immense balloons, which in essence there were, using the lighter elements of Jupiter’s atmosphere to stay aloft. 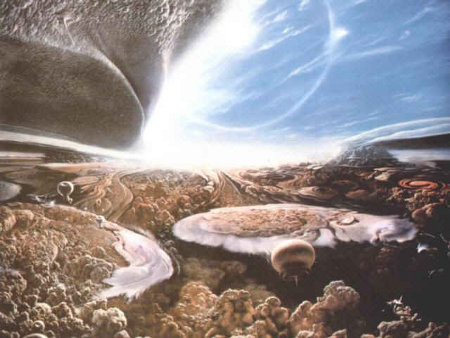 Image: Salpeter and Sagan’s Jovian aerialists, as imagined by the artist Adolf Schaller.

As with life on Earth, the Jovian ecosystem would also have its share of predators which Sagan and Salpeter named, appropriately, hunters. The hunters were envisioned as being fast and able to maneuver, preying on the floaters “for their organic molecules and for their stores of pure hydrogen.”

Love and Death Among the Gasbags

As author William Poundstone stated in his 1999 biography Carl Sagan: A Life in the Cosmos about this paper and its authors, “they produced one of the more singular scientific articles of the time, a quantitative analysis (with sixty equations) of life, love, and death in the air of Jupiter.” Poundstone was especially amused about Sagan and Salpeter’s speculations on how such Jovian natives might reproduce, highlighting the paper’s statement that “the distinction between hunting and mating under these conditions is not sharp.”

The paper also noted that the two Voyager space probes scheduled to make flybys of Jupiter in 1979 had cameras powerful enough to just resolve the floaters if such beings existed at that world and were high up enough to be spotted. Whether the images of Jupiter’s swirling, colorful face that were later returned by the twin robot explorers were ever scrutinized for any floaters remains unknown.

Landmark as this paper was, it was the appearance by the Jovian aerial beings in Sagan’s equally landmark television series Cosmos that brought this concept to the general public. In the second episode of the thirteen-part PBS series first shown in 1980, the Jovians were briefly introduced in a magnificent painting made by artist Adolf Schaller. Sagan also mentioned his colleague by name as the person who helped to bring these strange beings to life in both the episode and in the companion book to the series. The Cornell scientist noted that even if sinkers, floaters, and hunters did not actually live on Jupiter, they might still dwell on some other worlds in the Milky Way galaxy.