Between living dirigibles on gas giants and potential organisms under the ice, we’ve had quite a week in terms of exotic life-forms. I didn’t have space in yesterday’s review of Unmasking Europa to talk about the book’s chapter on biology, but here’s an interesting glimpse of a not implausible biosphere on that moon, as presented by physicist Richard Greenberg:

Brisk tidal water sweeps over creatures clawed into the ice, bearing a fleet of jellyfish and other floaters to the source of their nourishment. As the water reaches the limits of its flow, it picks oxygen up from the pores of the ice, oxygen formed by the breakdown of frozen H2O and by tiny plants that breath it out as they extract energy from the sun. The floating creatures absorb the ocygen and graze on the plants for a few hours.

The water cools quickly, but before more than a thin layer can freeze, the ebbing tide drags the animals deep down through cracks in the ice to the warmer ocean below. Most of the creatures survive the trip, but some become frozen to the walls of the water channels, and others are grabbed and eaten by anchored creatures waiting for them to drift past. The daily cycle goes on, with plants, herbivores, and carnivores playing out their roles.

One can only wonder what a rich environment we’ll eventually uncover on this water world. As to Jupiter itself, Larry Klaes’ story on Edwin E. Salpeter and the ‘gasbags of Jupiter’ elicited plenty of interest. Larry passed along this clip from the Cosmos series, containing the relevant comments by Sagan and discussing the development of these ideas:

A world “…in which organic molecules might be falling from the sky like manna from heaven, like the products of the Miller/Urey experiment” is not inconceivable as an abode of life. Sagan and Salpeter’s ‘sinkers,’ ‘floaters’ and ‘hunters’ seize the imagination, but I like the broader frame Sagan places them in: “Biology is more like history than it is like physics. You have to know the past to understand the present. There is no predictive theory of biology just as there is no predictive theory of history. The reason is the same — both subjects are still too complicated for us…”

Understanding how to frame a complex issue is what communication is all about, a fact that’s seldom so gracefully exemplified as in Cosmos.

If you’ve gone back to look at Larry’s post on Sagan and Salpeter’s Jovians, you’ll have noticed that I changed the artwork. Larry wrote shortly after I posted the story that I had chosen the wrong image — the one from Cosmos, as viewable in the video above, is the one now embedded in the text. As to the other, a Schaller image that I reinsert below, it was used as the cover of the artist’s book Extraterrestrials: A Field Guide for Earthlings (Camden House, 1994). And if memory serves, it also ran as a magazine cover — I suspect on an issue of Analog from the 1970s, but if anyone knows for sure, drop me a note. 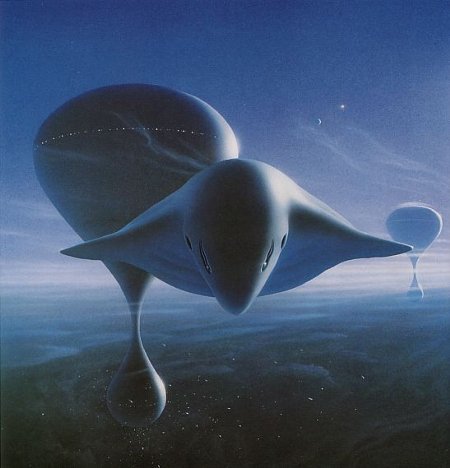