We’ve already speculated here that if the Kepler mission finds few Earth-like planets in the course of its investigations, the belief that life is rare will grow. But let’s be optimists and speculate on the reverse: What if Kepler pulls in dozens, even hundreds, of Earth-sized planets in the habitable zones of their respective stars? In that case, the effort to push on to study the atmospheres of such planets would receive a major boost, aiding the drive to launch a terrestrial planet hunter with serious spectroscopic capabilities some time in the next decade.

Budget problems? Let’s fold Darwin and whatever Terrestrial Planet Finder design wins approval into the same package, and make this a joint NASA/ESA mission. Finding numerous Earth-like planets will be a driver, as will gradual economic recovery. 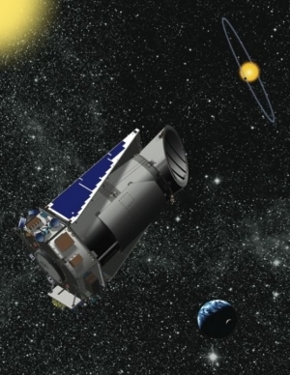 The discovery of numerous ‘Earths’ would also galvanize public interest in interstellar flight, which offers a useful educational opportunity. Even the short-lived boomlet for Gliese 581 c inspired talking television heads to ask how we might get to the place, prompting the media to look into the distances involved and the challenges of propulsion. In my conversations, the initial response is usually dismay at the magnitude of the challenge, but it’s often followed by interest. Isn’t there anything we can do?

Image: Kepler at work in the search for Earth-like planets. Credit: NASA.

As we wait for the start of the Kepler mission, still scheduled for Friday night, the question of Kepler’s impact upon our SETI views also arises. It’s one thing to be trying to detect signals from an extraterrestrial civilization in a galaxy crowded with Solar Systems like our own, but fewer terrestrial worlds would correspondingly lower the chance for contact. Yet even a single civilization that attained star-faring status at some point in our galaxy’s evolution may have been able to construct self-replicating probes to explore the galaxy robotically. If star travel is possible, Fermi’s ‘Where are they?’ still resonates even in an uncrowded universe.

Let me direct you to Charles Magee, Jr.’s Fermi paradox meets the timescale, where this field geologist sees the question through the lens of deep time. “As a geochronologist, I don’t wonder where and why, I wonder when,” writes Magee, who goes on to generate fifty random alien arrival times within the approximately 4.5 billion year window since the Solar System emerged from its accretion disk. He lists them in order, the most recent of them being 125 million years ago in the era of the dinosaurs. 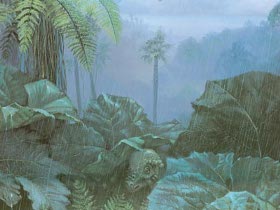 That appearance in the Cretaceous is preceded by an alien visit at 270 million years ago at a time of Gondwanan glaciers, and a 352 million year old visit in the Carboniferous era of swamps and giant insects. Clearly, Magee’s aliens aren’t finding much to communicate with, but these eras would at least have been filled with enormous biological diversity. Keep going back in time and you realize what a tiny veneer our own species’ existence represents over the deep time that encrusts planet Earth.

Image: What an alien visitor might have seen in the Cretaceous. No technological cultures here! Source: Canadian Museum of Nature.

Suppose, for example, that our aliens showed up in the Late Heavy Bombardment some 3.875 billion years ago. Their take on life’s chances would be correspondingly gloomy — what could survive this — or at least tempered by the knowledge that what did develop in the aftermath would not be a technological factor for aeons to come. And so it goes, from Mesoproterozoic to Neoarchean to the colossal whack of a Mars-sized object into the Earth that would create the Moon, back in the Hadean era.

Magee’s point is clearly made:

As you can see, for aliens looking for ‘Earthlike’ planets, the actual Earth was easy to overlook for most of its history. In this simulation, there was only macroscopic life for 3 of 50 visits. From another POV, three visits were either during the Late Heavy Bombardment, or during the moon forming impact- both of which would appear (to the casual alien visitor) to make long-term viability of life on Earth pretty unlikely.

So as we start to find ‘earth-like’ planets in our sky surveys, it is important to remember that Earth has only been Earthlike for a relatively short period of time.

The Rise of Ancient Probes

I’ve often noted the frequent public misconception of interstellar distances and their true scale, but I think we’re all sometimes guilty of forgetting our own context within deep time, a context Magee brings into high visibility in this post. And, of course, no matter what Kepler finds, we’ll still be a long way from knowing whether life of any kind, much less complex life, exists on the worlds it finds. The question will still be not so much whether any other technological civilizations could arise in the same galaxy, but whether they’re numerous enough to arise at the same time.

Have a quick look at this video, produced by Claire Evans at SEED Magazine. It condenses 4.6 billion years of history into a single minute, offering a unique perspective:

So much depends upon the question of civilization lifetimes. But again, let’s assume that at least a few civilizations have found a way to get past their technological infancy, past the period when they were likely to destroy themselves with their own tools, and have expanded into nearby space. If Frank Tipler’s view is reasonably correct, then a million years is a sufficient time for self-replicating probes to work their way through the entire galactic disk. Indeed, Tipler went on in his famous 1980 paper to say that the Local Group of galaxies could be colonized within ten million years, and the entire Virgo cluster within a hundred million years.

Knowing When to Wake Up 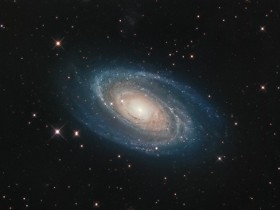 You can think of places within the Solar System where an ancient probe, self-repairing and dormant, might wait for whatever it is that would trigger its awakening. We commonly assume that it is the emergence of creatures like us that would do the trick, but why? We have no galactic context in which to place ourselves. We may be numbingly rare as an intelligent species, or merely a transitional phase between biology and other forms of consciousness, a stopgap along the way to true maturity.

Image: The spiral galaxy M81 in Ursa Major. Could self-replicating probes reach every solar system in such a galaxy within a million years? Credit: Giovanni Benintende.

Why assume, in other words, that a von Neumann probe of this kind, perhaps lurking in one of the Lagrangian points, or out in the asteroid belt, or perhaps in the Kuiper Belt, would be activated by our current level of development? In the absence of such knowledge, we might well conclude no such probes exist, but it is conceivable that infrared studies of the outer system, of the sort advocated by Gregory Matloff and Anthony R. Martin, may one day turn up just the kind of anomalous signature that an artificial body would throw. It’s certainly worth the look, and a reminder that there are potential SETI venues that are closer to home than the nearest stars.

Two interesting places to start are twin papers by Matloff and Martin. The first is “A Proposed Infrared Search for Artificial Kuiper Belt Objects,” Journal of the British Astronomical Society 57 (November/December 2004, pp. 283-287, while “Suggested Targets for an Infrared Search for Artificial Kuiper Belt Objects,” JBIS 58 (January/February 2005), pp. 51-61 follows up on that work. Also useful is Allen Tough, “Small Smart Interstellar Probes,” JBIS 51, no. 5 (May 1998), p. 167 ff. The British Interplanetary Society needs to get some of this good material online.