Take a look at NGC 4565, a spiral galaxy seen edge-on. Spiral galaxies viewed at this angle often show dark dust lanes, the result of dust from dying stars mixing with interstellar gas. We’ve discussed the problem of interstellar dust in terms of objects moving at relativistic speeds between stars, but recent quasar studies are showing us that entire galaxies may expel dust to distances of several hundred thousand light years. In terms of the NGC 4565 image, that would be ten times farther than the visible edge of the galaxy. 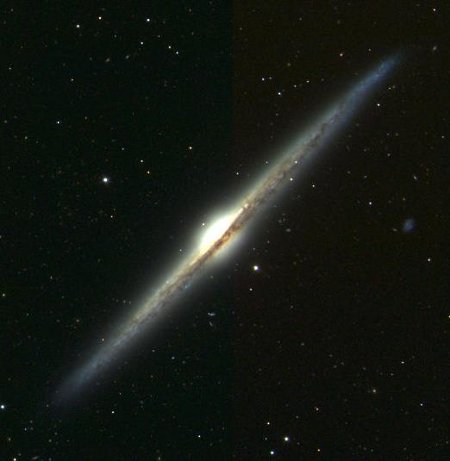 Image: Spiral galaxies seen edge-on often show dark lanes of interstellar dust blocking light from the galaxy’s stars, as in this image of the galaxy NGC 4565. The dust is formed in the outer regions of dying stars, and it drifts off to mix with interstellar gas. Credit: Sloan Digital Sky Survey (SDSS-II).

The astronomers who did this work talk of intergalactic space being filled with a haze of fine dust particles, a haze that can be examined by analyzing light from distant quasars as it moves near foreground galaxies on its way to Earth. The colors of 100,000 quasars were studied via the Sloan Digital Sky Survey, their light examined in relation to some 20 million galaxies. The reddening of quasars from intergalactic dust draws on the fact that dust grains block blue light more effectively than red, an effect commonly seen in sunsets on Earth.

So is the reddening of quasars caused by intergalactic dust a showstopper for dark energy, that still mysterious effect seemingly responsible for the acceleration of the universe’s expansion? Evidently not — the effects are simply too subtle. Says Ryan Scranton (UC-Davis): “Our results imply that most distant supernovae are seen through a bit of haze, which may affect estimates of their distances.” No showstopper here. Scranton simply describes the dust as ‘a bit of a nuisance,’ one that has to be factored into future high precision measurements as we try to understand how dark energy is changing the cosmos.

Much depends on the result. From the paper (internal references omitted for brevity):

Light rays from distant sources carry unique information about the matter and gravitational potential along the line-of-sight. A well-known example is the signature of intervening gas clouds imprinted into spectra of background sources via absorption lines. Mass concentrations located along the path of photons can also induce gravitational lensing effects. Background sources can be magnified… and galaxy shapes can be distorted as measured through galaxy-galaxy lensing… and cosmic shear. Measuring these effects has become a powerful tool for probing the mass distribution in the Universe.

The paper is Ménard et al., “Measuring the galaxy-mass and galaxy-dust correlations through magnification and reddening,” submitted to Monthly Notices of the Royal Astronomical Society and available online.