Unusual Genesis of a Supernova

More on Saturday’s supernova story, which was truncated both because I was wrestling with a flu bug but also because I needed to verify that the supernova under study at the Weizmann Institute of Science (Israel) was the event — SN 2005gl — examined in Nature this past week. A quick response from the Institute’s Avishay Gal-Yam confirmed the identity, which means we have more to say about this unusual observation. 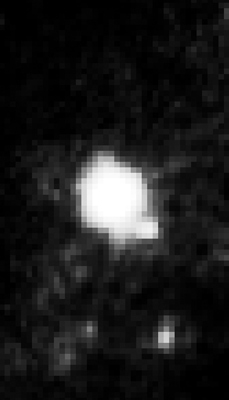 Located some 215 million light years from us, SN 2005gl is striking on several counts, not least of which is that the blast of a supernova generally covers up all evidence of what the star once was. What Gal-Yam and co-author Douglas Leonard (San Diego State) discovered is that the Hubble Space Telescope had an image of the galaxy containing the progenitor star as it appeared eight years before it exploded. Moreover, the star stood out, being one of the brightest and most massive in the host galaxy.

If you recall Saturday’s story, the star in question was thought to be some fifty to one hundred times as massive as the Sun, in the range where we expect an exploding star to produce a black hole. The ‘disappearance’ of the stellar remnant after the explosion, as confirmed with Keck and later Hubble imagery, gives the theory credence. But the star itself poses still more provocative questions. Eight years ago, its absolute visual magnitude (-10.3) flagged it as one of the class known as Luminous Blue Variables (LBVs).

We would expect an LBV-class star to lose a great deal of its mass through its solar wind, the assumption being that this precedes the formation of a large iron core and the ultimate core-collapse supernova. But in the case of SN 2005gl, that process seems to have been short-circuited, as Leonard points out:

“The progenitor identification shows that, at least in some cases, massive stars explode before losing most of their hydrogen envelope, suggesting that the evolution of the core and the evolution of the envelope are less coupled than previously thought, a finding which may require a revision of stellar evolution theory.”

All of that from the identification of a star getting ready to go supernova on an archival Hubble image. Sometimes we get reminders of how much good science can come from the massive archives we are building through computer technology, much of this material awaiting further productive study. In the case of supernova explosions, this latest finds says that we may have to continue looking for the causative mechanisms, at least in terms of stars of this size and their process of shedding mass. 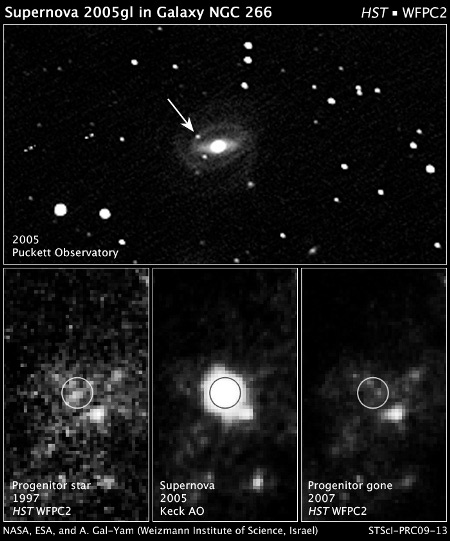 Image (click to enlarge): [Top Center] This is a 2005 ground-based photograph of the supernova as seen in host galaxy NGC 266, located in the constellation Pisces. Credit: Puckett Observatory

[Bottom Left] This is a 1997 Hubble archival visible-light image of the region of the galaxy where the supernova exploded. The white circle marks a star that Hubble measured to have an absolute magnitude of -10.3. This corresponds to the brightness of 1 million suns (at the galaxy’s distance of 215 million light-years). Credit: NASA, ESA, and A. Gal-Yam (Weizmann Institute of Science, Israel)

[Bottom Center] This is a near-infrared-light photo of the supernova explosion taken on Nov. 11, 2005, with the Keck telescope, using adaptive optics. The blast is centered on the position of the progenitor. Credit: NASA, ESA, and A. Gal-Yam (Weizmann Institute of Science, Israel), D. Leonard (San Diego State University), and D. Fox (Penn State University)

[Bottom Right] This is a visible-light Hubble follow-up image taken on September 26, 2007. Note that a bright source near the site of the supernova can be seen in all three panels, but the progenitor star is gone. The Hubble pictures from both epochs were taken with the Wide Field Planetary Camera 2. Credit: NASA, ESA, and A. Gal-Yam (Weizmann Institute of Science, Israel)

Only a small part of SN 2005gl’s mass was blown away in the explosion, with most of it being drawn into the collapsing core. The black hole that resulted is thought to be between ten and fifteen solar masses. SN 2005gl becomes only the second supernova progenitor we’ve definitively identified, and bear in mind that the earlier one, SN 1987A, led to a re-thinking of supernova theory. This new supernova seems to put our theories once again to the test, with results that require yet more revision.

The paper is Gal-Yam and Leonard, “A massive hypergiant star as the progenitor of the supernova SN 2005gl,” Nature online publication 22 March 2009 (abstract). A Space Telescope Science Institute news release is also available.