“Interstellar travel may still be in its infancy,” write Gregory Matloff and Eugene Mallove in The Starflight Handbook (Wiley, 1989), “but adulthood is fast approaching, and our descendants will someday see childhood’s end.” The echo of Arthur C. Clarke is surely deliberate, a sign that one or both authors are familiar with Clarke’s 1953 novel about the end of human ‘childhood’ as we learn about the true destiny of our species in the universe. But becoming a mature species isn’t easy, nor is figuring out interstellar flight.

Consider just one layer of complexity. Suppose we somehow discover a propulsion system that gets us to relativistic speeds in the range of 0.3 c. That seems a minimum for regular manned starflight given the times and distances involved, but suddenly attaining it doesn’t end our problems. Interstellar space isn’t empty, and when we accelerate to cruising speed at a substantial percentage of the speed of light, our encounter with interstellar gas becomes a nightmare. Indeed, this haze of gas between the stars acts as a flow of nucleonic radiation bombarding the starship as we push ever higher into relativistic realms. 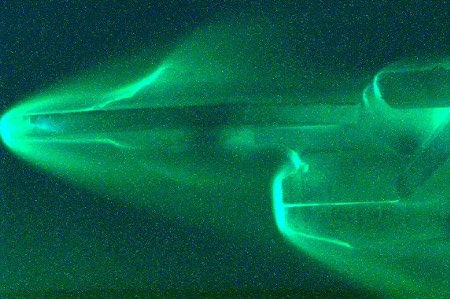 Image: As a playful example of science fiction mixing with science, this photo shows the luminosity from hot gas used in a hypersonic “super-orbital expansion tube X2” test rig at the University of Queensland, Australia. A toy model of the fictional starship Enterprise is subjected to a Mach 5 flows. (Credit: Tim McIntry, Queensland Physics Department/Marc Millis).

And let’s not forget high-energy cosmic rays and dust, all of which demand protection. Because sensitive electronics are susceptible to damage as well as humans, we have to work out the hazards whether our mission is manned or not. A non-relativistic capsule moving in interstellar space would, according to Oleg Semyonov (State University of New York at Stony Brook), experience a radiation dose of 70 rems per year, while the safety level for people is considered to be between 5 and 10 rems in the same period. Going relativistic drives the dosage level to far greater extremes.

Did I say ‘greater’? Try this much greater: Thousands or hundreds of thousands of rems per second, comparable to conditions in the core of a nuclear reactor. All this from a ship moving at high relativistic speeds through interstellar gas. But even slower velocities are a problem as we move through this medium.

Semyonov plots the radiation involved from encountering interstellar gas versus velocity and finds that at speeds much above a comparatively sedate 0.1 c, an astronaut could not be outside the hull without layers of shielding. Shielding the entire ship is problematic. A radiation-absorbing windscreen installed in front of the vehicle is possible, a titanium shield of 1-2 cm workable up to 0.3 c but becoming ‘dramatically thicker with acceleration.’

Water? It’s not a bad idea because the crew needs water anyway:

Placing a water tank (or an ice bulge) in front of a ship is advantageous in comparison with a shield made of metal or another solid material because it eliminates the damaging embrittlement of solids under intense nucleonic radiation; for a given cruising speed, the penetration depth of monoenergetic nucleons will be the same and a layer located near the penetration depth inside a solid shield will be largely damaged because all the nucleons deposit the bulk of their kinetic energy at the end of their penetration depth dislocating atoms from the lattice, weakening the material, and causing peeling or flaking.

On the other hand, our water shield adds significant mass to the vessel, and at speeds close to that of light, it would need to be tens of meters thick to form an effective barrier. So we can contemplate titanium or aluminum hull shielding up to about 0.3 c, but 0.8 c demands several meters of titanium or the water barrier.

Cosmic rays are a hazard to any interstellar mission, relativistic or not. Water is again an option, but Semyonov notes that a ship would require a ’round shell of water of 5 m in thickness,’ a huge increase in mass, and still insufficient for absorbing the highly penetrating secondary gamma and muonic radiation that will bathe the ship, demanding an additional shield of its own. Usefully, cosmic rays become increasingly beamed as we increase velocity, so that a frontal shield for interstellar gas can also absorb them.

Isotropic cosmic rays are subjected to relativistic beaming when a starship is moving with a relativistic speed. For the ship’s velocities closer to the speed of light, most of cosmic rays form into a beam directed toward the front of the spaceship. While they do present a hazard, they can be easily absorbed or deflected by a frontal shielding system that is required anyway protecting the crew and electronics against the hard radiation of the oncoming flow of interstellar gas. Cosmic dust will also contribute to the radiation hazard, because the dust particles are actually lumps of high-energy nucleons at relativistic velocities. A serious problem will be the sputtering of a ship’s bow or a radiation shield by the relativistic dust particles. Nevertheless, the shielding of relativistic starships from hard ionizing radiation produced by interstellar gas and cosmic rays does not seem to be far beyond existing technology.

In other words, if we can figure out the key question of propulsion, we should be able to overcome the shielding issue. Semyonov considers a range of options including combinations of material and magnetic shielding in arriving at this conclusion. His discussion is a wide-ranging and sobering reminder of how many barriers interstellar flight presents beyond tuning up the right kind of engine. Childhood may end, but we biological life-forms remain fragile creatures indeed when flung into the interstellar deep.