A Serendipitous Encounter with Warp Drive

How can the space between the stars be so full of stuff? So commented a friend who chanced upon this site, reading our discussion of interstellar gas and dust and the troubling fact that moving through it at high speeds bathes a spacecraft in radiation. Not an issue for our current generation of spacecraft, dust and gas rise in significance as we reach velocities that are an appreciable fraction of the speed of light, creating the need for various kinds of shielding. So what exactly is that stuff in outer space?

Break down the interstellar medium and you get almost 90 percent hydrogen, with ten percent or so helium and trace elements like carbon, oxygen, silicon and iron accreted in dust particles. Oleg Semyonov, in his recent Acta Astronautica paper, examines all this, noting that the concentration of interstellar gas varies greatly between 104 cm-3 in galactic clouds to less than 1 cm-3 in the regions between the clouds. Our own Solar System lies in a cavity of low-density gas, with the nearest ‘wall’ located about 170 light years out in the direction of the galactic core.

From Relativistic Dust to FTL

So much for empty space, in regions which, if we produced them in a laboratory here on Earth, we would consider the hardest of vacuums. Writing about anything is always serendipitous, but never more so than when looking at interstellar matters. Had it not been for the Semyonov paper, I wouldn’t have gotten to Stefano Finazzi’s study of warp drive theory as quickly as I did. Both Larry Klaes and Adam Crowl discussed the Finazzi paper in comments to the interstellar dust story. Adam wrote the matter up on his Crowlspace site and Larry pointed to this squib in Technology Review.

Then a note from Kelvin Long pointed to discussion of warp drive instability at the recent interstellar session at the Charterhouse conference in the UK, and suddenly problems at superluminal speed were filling my hard disk. And rightly so, for it turns out that dangerous radiation isn’t simply an external issue, a matter of shielding a spacecraft from matter it encounters while at relativistic speeds. If warp drive is carried through to its logical conclusions, we may well run into something even worse when going superluminal — a devastating radiation that would destroy our fragile human payload.

Alcubierre’s Theory, and a Problem

Let’s look more closely. Warp drive as envisioned by Miguel Alcubierre relied on the concept that although nothing could move faster than the speed of light through spacetime, spacetime itself is not so restricted. We do not, in fact, have any notion of a limit to the ‘stretching’ of spacetime, a fact brought home by inflation theory, which posits an immense expansion of the early universe in a mere flicker of time. Contract the spacetime in front of a vehicle while expanding it behind and the spacecraft itself never exceeds the speed of light even though the ‘warped’ spacetime delivers it to its destination faster than would otherwise be possible. 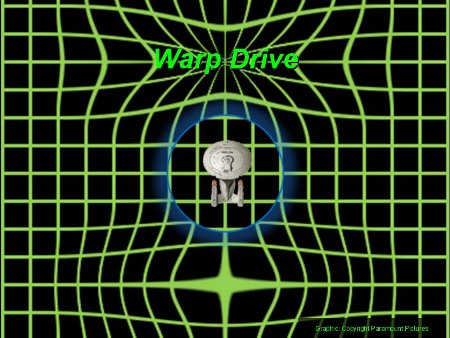 All of which calls for immense supplies of energy, and negative energy at that, so that recent work has been (more or less unsuccessfully) devoted to understanding how to reduce those requirements to something remotely manageable. Now Finazzi and team have folded quantum mechanics into their consideration of warp drive theory, with the result that warp drive is shown to be untenable for the hapless crew. The inside of the ‘bubble’ housing the spacecraft, in fact, becomes filled with Hawking radiation, emitted by black holes due to these very quantum effects.

Thus we’ve gone from shielding the vehicle from external radiation to coping with a radiation phenomenon arising from the drive itself. And in this context it’s pretty much of a show-stopper. Let me quote Adam Crowl’s treatment of this in Crowlspace, since it’s so much clearer than what I was able to come up with:

…a somewhat more serious difficulty arises because of the horizons that the warp-metric creates. These horizons act just like black-hole Event Horizons and so they produce Hawking radiation. Hawking radiation is normally quite benign as most horizons are pretty large – for example, a collapsed star’s horizon is typically 10 km across. But in a warp-metric there are two horizons – forward and aft, contracting and expanding – and to produce them very thin shells of “negative energy” are needed. And because they’re so very thin (~10-35 metres) the Hawking temperature is very, very high – i.e. a large fraction of the Planck Temperature (1032 K.) Ouch!

Ouch indeed. Add to this the other problem noted by the Finazzi team, that the bubble of spacetime we are manipulating seems itself to be unstable, too much so for our spacecraft, sitting in its zone of flat spacetime, to take advantage of the warp drive effect. Possible use of warp drive design at subluminal speeds does not seem to be ruled out, but is a definite come-down when compared to the ease with which we hoped warp drive might span the stars.

Is this the end of Alcubierre-style warp drive theory? Surely not, but it’s now up to the next round of investigators to look hard at the Finazzi results to see whether there are ways around the quantum challenge. The paper is Finazzi et al., “Semiclassical instability of dynamical warp drives,” available online.