Theia and the ‘Big Whack’

The idea that the Moon was formed through the impact of a Mars-sized object with the early Earth (the ‘big whack’) has gained credibility over the years. Call it ‘Theia,’ a hypothetical planet that may have formed in our system’s earliest era. And place it for argument’s sake at either the L4 or L5 Lagrangian point, where the gravitational influences of other developing planets like Venus may have destabilized its orbit, accounting for the subsequent impact. 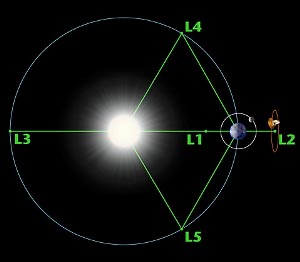 It’s an interesting notion that helps us to understand why the Moon has such a small iron core. In the early Solar System, both Theia and Earth would still have been molten, so that heavier elements like iron sank into their cores. The effect of the impact, say Princeton University’s Edward Belbruno and Richard Gott, would have been to strip away primarily the lighter elements on the outer layers of the two planets, providing the building blocks for the Moon.

It’s helpful that where an object forms tells us much about its characteristics. Consider water, for example, The gas and dust that gave birth to our Solar System changed as temperature varied, with the Earth at a warm 1 AU forming largely out of silicon, magnesium and iron, with enough oxygen to oxidize much of the former. Proximity to the Sun meant that the infant Earth had little water, especially compared to bodies that formed further out in the system, and volatiles like ice may have been delivered to our world by incoming objects from the outer regions of the cloud — beyond the so-called ‘snow line’ — where water is more common.

In the case of the Theia investigation, we can assume that any L4 or L5 asteroids with the same composition as the Moon and the Earth would therefore have formed in roughly the same orbital location. And evidently it is precisely in these L4 and L5 regions where Belbruno and Gott’s calculations show Theia could have grown.

How to learn more? As we’ve noted earlier in these pages, NASA’s twin Solar Terrestrial Relations Observatory (STEREO) spacecraft are about to enter the L4 and L5 regions, each 93 million miles away along Earth’s orbit. “These places may hold small asteroids, which could be leftovers from a Mars-sized planet that formed billions of years ago,” says Michael Kaiser, project scientist for STEREO at NASA GSFC. If so, STEREO’s imaging instruments may be able to spot one or more of them.

With STEREO now nearing both regions, and with both remaining in the field of view of the two craft after passage through these huge swathes of space, we have an opportunity to put the Theia theory to a useful test. Want to get involved? Anyone with an Internet connection can help in the painstaking work of spotting an asteroid as it changes position against background stars. The data can be viewed at the Sungrazing Comets site, where both STEREO and SOHO (Solar and Heliospheric Observatory) data are available for access.