Three brown dwarfs with masses that push up against the boundary between star and planet have been identified in IC 348, a star-forming region some 1000 light years from Earth in the direction of the constellation Perseus. The dwarfs do not appear to be gravitationally bound to a star although they are bound by the cluster, and they’re useful as we try to broaden our understanding of the mass distribution in newly formed stellar populations.

Andrew Burgess (Observatoire de Grenoble) has this to say about the find:

“There has been some controversy about identifying young, low mass brown dwarfs in this region. An object of a similar mass was discovered in 2002, but some groups have argued that it is an older, cooler brown dwarf in the foreground coinciding with the line of sight. The fact that we have detected three candidate low-mass dwarfs towards IC 348 supports the finding that these really are very young objects.” 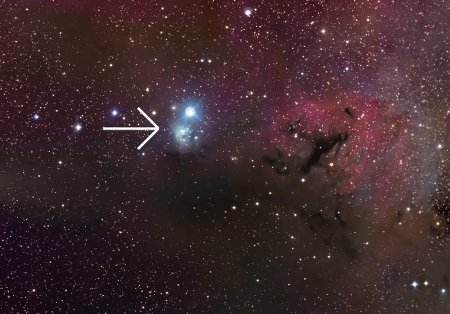 Bear in mind that brown dwarfs cool with age. This news release indicates that current models show temperatures of between 600-700 degrees Celsius for the objects, extremely cool for newly formed brown dwarfs, with the implication of low mass. Again we push into areas of brown dwarf and sub-stellar object discovery that show how much work we have ahead as we catalog the local neighborhood.

So are brown dwarfs ubiquitous, occurring in sufficient numbers to account for an appreciable amount of the ‘dark matter’ in the galaxy? Studies are ongoing, but the three major ones that have already been completed indicate that the answer is no. The MACHO Project (Massive Astrophysical Compact Halo Object, a term for large astronomical bodies that can explain what seems to be dark matter in galactic haloes), along with the EROS and OGLE collaborations, all involved studies of the Small and Large Magellanic Clouds, satellite galaxies to our own Milky Way.

Using stars in the LMC and SMC as light sources, the teams observed the stars for several years and looked for the kind of lensing events that would indicate the presence of a dark object between the star and the observer. The MACHO and EROS teams announced the detection of three MACHOs as far back as September of 1993. That was after looking at 1.8 million stars for one year (MACHO) and 3 million stars for three years (EROS). By the end of the decade, the teams had a combined score of about twenty microlensing events.

Here’s a quote from Evalyn Gates’s new book Einstein’s Telescope: The Hunt for Dark Matter and Dark Energy in the Universe (W.W. Norton, 2009), a survey of where we stand on dark energy and dark matter studies with a focus on gravitational lensing:

The final paper of the MACHO collaboration, published in 2000, concluded that a Galactic halo consisting entirely of MACHOs was now ruled out, and estimated that about 20% of the Galactic halo was in the form of MACHOs. The EROS team preferred to present its results as an upper limit on the number of MACHOs in the halo, with no more than about 8% of the halo in MACHOs having masses of about one-tenth to one times the mass of the Sun. A combined analysis of the two experiments showed that, within the uncertainties of each experiment, they are consistent with each other and that less than 20% of the halo is in the form of MACHOs.

Gates goes on to say:

MACHOs, the least exotic candidates for dark matter, have now been effectively ruled out as the main component of the dark matter, leaving WIMPs to dominate the Galaxy…. Nevertheless, there seems to be evidence for some MACHOs in the Galactic halo, even if not enough to be interesting from a dark matter point of view.

WIMPs are Weakly Interacting Massive Particles, hypothetical particles that cannot be seen directly and do not interact strongly with atomic nuclei. That makes them far more exotic than MACHOs as a dark matter solution, but currently they seem to have taken the lead over the MACHO theory. Given the progress of our studies in these matters, though, it would be premature to call this investigation over, and further dark matter surprises seem likely.