Renewed Challenge to the Dinosaur Killer

Some scientific hypotheses seem too perfect to be anything but true. Long before we understood the processes behind plate tectonics, the natural fit between the coasts of Africa and South America made the notion of their original linkage seem obvious. Although dismissed in many quarters as mere coincidence, the piecing together of earlier continents would follow. The hypothesis of continental movement, whatever the cause, was almost too obvious not to be true.

But does science really work so neatly? Writing about his work on the evident ‘dinosaur killer’ event at the Cretaceous/Tertiary boundary, Walter Alvarez once said:

“Much of the work we do as scientists involves filling in the details about matters that are basically understood already, or applying standard techniques to new specific cases. But occasionally there is a question that offers an opportunity for a really major discovery.”

And the K/T impact seemed, like the continental coastlines, to be an obvious fit, a breakthrough that changed everything.

But the theory of the 65 million year old killer impactor at Chicxulub is again being challenged, at least in terms of its effect on the dinosaurs and the destruction of countless species. Gerta Keller (Princeton University) and Thierry Adatte (University of Lausanne) believe the Chicxulub crater in northern Yucatan was formed some 300,000 years before the mass extinction occurred. Moreover, Keller argues in the upcoming Journal of the Geological Society that not a single species went extinct as a result of the impact. 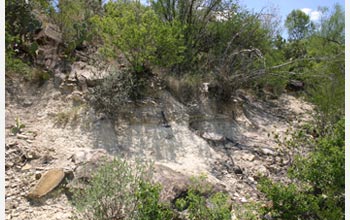 The debate over Chicxulub is not new. In fact, The Geological Society held an online forum called the Great Chicxulub Debate back in 2004, allowing Keller to argue the case against a single impactor as dinosaur killer:

The Chicxulub impact was not the only thing making life horrible at the end of the Cretaceous. The mass extinction coincides in time with yet another – probably larger – impact right at the Cretaceous-Tertiary (K/T) boundary, which is well documented by virtue of its global iridium distribution. Moreover, massive volcanism that would one day create India’s Deccan traps began during the late Maastrichtian and continued into the early Tertiary 4.5, causing major climate changes and long-term biotic stress. This stress, we believe, culminated in the K/T mass extinction – which we think was the combined effect of both volcanism and impacts.

The online debate is worth reading, as it lays out the basics of the case, which in its latest findings focuses on sediments deposited during the tens of thousands of years after the impact. Between four and nine meters of sediments, in Keller’s words, “…deposited at about two to three centimeters per thousand years after the impact. The mass extinction level can be seen in the sediments above this interval.”

This sandstone deposition accumulated over a long period and shows all the characteristics of normal sedimentation. That, Keller argues, makes it unlikely that disturbances caused by the impact could have made these deposits unreliable evidence, as some supporters of the Chicxulub impact theory have argued.

If we begin to see the K/T event as the result of more than a single impact at Chicxulub — and perhaps not related to Chicxulub at all — then we are tracing climatic and geological changes that worked in conjunction with a devastating impact elsewhere. In either case, the tale of mass extinctions the Earth tells reminds us that we live in an environment that can turn on its inhabitants. A space-based species backup plan — beginning with asteroid deflection technologies — continues to make long-term sense.

Addendum: A paper by James Fassett in Palaeontologia Electronica, just published today, argues that dinosaurs may have survived in a remote area of what is now New Mexico and Colorado for up to half a million years after the extinction event.