Do rogue black holes wander through the distant outskirts of the Milky Way? A new theory suggests one way to find out: Look for small clusters of stars that should accompany such objects. The idea is that low-mass proto-galaxies with black holes at their center would have merged, creating a gravitational kick that would send the now larger black hole outward fast enough to escape the host dwarf galaxy, but not fast enough to leave the overall galactic halo. 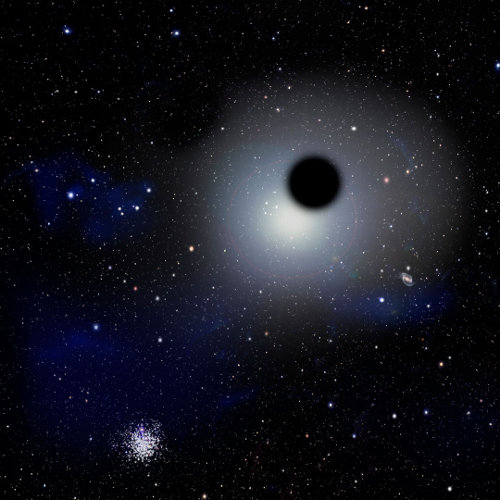 Image: This artist’s conception shows a rogue black hole floating near a globular star cluster on the outskirts of the Milky Way. New calculations by Ryan O’Leary and Avi Loeb suggest that hundreds of massive black holes, left over from the galaxy-building days of the early universe, may wander the Milky Way. Fortunately, the closest rogue black hole should reside thousands of light-years from Earth. Credit: David A. Aguilar (CfA).

The ‘kick’ comes from the emission of gravitational waves as the black holes merge, carrying away linear momentum. We can sometimes find black holes because of their accretion of matter, which makes them visible. But to find these rogue objects, each massing from a thousand to hundred thousand suns, we should search for remarkably compact clusters of stars whose individual components are moving rapidly. Says Ryan O’Leary (Harvard-Smithsonian Center for Astrophysics), who developed this work along with Avi Loeb:

“The surrounding star cluster acts much like a lighthouse that pinpoints a dangerous reef. Without the shining stars to guide our way, the black holes would be all but impossible to find.”

A window into galactic history? Evidently so, as the paper argues (internal references omitted for brevity):

During the hierarchical build-up of the Milky-Way (MW) galaxy, mergers of low-mass galaxies were common and should have resulted in a population of freely floating BHs [black holes]. Since the gravitational potential of an overdense region does not evolve dramatically during the growth of cosmological structure the
region that eventually collapsed to make the MW was able to trap those BHs with the most common kick velocities… even before the MW had formed. Each of the ejected BHs carries with it a star cluster that used to populate the core of its parent galaxy. In this paper we examine the observational signatures of the ejected star clusters which are expected to be floating in the MW halo. The discovery of a relic population of the star clusters attached to recoiled BHs would provide a new window for cosmology, allowing one to constrain the merger history of the MW as well as the formation history of the first population of massive BHs.

The galactic halo, then, may contain evidence of the Milky Way’s history, the number of black holes there depending upon the number of small proto-galaxies that went into its creation. It’s a theory with a useful observational test, one that can be examined by poring through sky surveys looking for these compact star clusters with their highly individualistic signature.

The paper is O’Leary and Loeb, “Star clusters around recoiled black holes in the Milky Way halo,” accepted by Monthly Notices of the Royal Astronomical Society and available online. A Harvard-Smithsonian Center for Astrophysics news release is also available.