I want to talk about an exciting project to find traces of cosmic inflation today, but first, a bit of housekeeping. Regulars will know that server issues a couple of weekends ago caused me to change the software this site uses to a temporary WordPress theme while I worked to install a more permanent solution. The new look is now in place, with a wider page, changes in fonts and, behind the scenes, all kinds of useful tools that will make maintaining and upgrading Centauri Dreams a far less arduous proposition.

The new server configuation seems stable as well, so I’m hopeful that those recent issues are past us. No Web site is ever complete, and I have numerous tweaks to phase in over the coming months, but having a stable platform is obviously the first task.

Now, to that inflation story. Over the weekend at the American Physical Society meeting in Denver, Ki Won Yoon (National Institute of Standards and Technology) described an experimental collaboration that is using incredibly sensitive microwave detectors to take us ever deeper into the cosmic microwave radiation. We’ve gone a long way toward measuring the CMB’s temperature, looking at the slight variations that existed some 380,000 years after the Big Bang and shaped today’s cosmos.

Called the Atacama B-mode Search, the new experiment will probe the early universe using these enhanced detectors to pull yet further information out of the primordial CMB signal. What the researchers are looking for is the signature of gravitational waves, evidence for which may be found in their imprint on the direction of the CMB’s electric field. That signature, called B-mode polarization, has yet to be confirmed, but the new experiments may be able to find it, thus offering support to inflation concepts. “A detection of primordial gravitational waves through CMB polarization,” says Ki Won Yoon, “would go a long way toward putting the inflation theory on firm ground.” 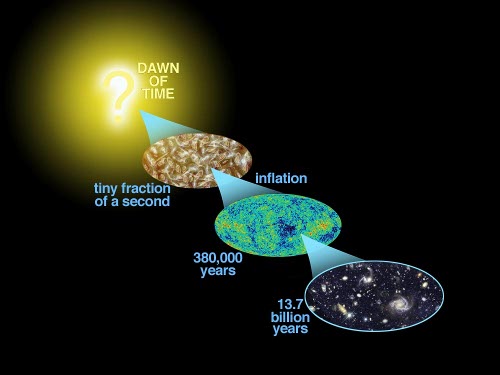 Image: What we observe of the Cosmic Microwave Background emerged 380,000 years after the Big Bang. Patterns imprinted on this light encode the events that happened only a tiny fraction of a second after the Big Bang. In turn, the patterns are the seeds of the development of the structures of galaxies we now see billions of years later. B-mode polarization may tell us whether current thinking about inflation explains what we see. Credit: NASA / WMAP Science Team.

This would be quite a find, and one pushing our detection methods to the limit, given that B-mode polarization signals may be a million times fainter than the temperature changes we’ve studied thus far. It would give us insights into a process by which spacetime itself seems to have expanded all but instantaneously from subatomic size, and might also offer clues about different models of string theory and other unified theories of physics. The arrays to do all this will be mounted on a telescope in the Chilean desert approximately a year from now.

What bracing times for cosmology as we probe ever deeper into the CMB. From our propulsion perspective, cosmic inflation is a reminder that spacetime itself is not affected by the speed of light limitation that constrains objects moving through it. This is the foundation of the Alcubierre ‘warp drive’ concept, which manipulates spacetime in front of and behind the starship but does not violate Special Relativity. Such a feat may or may not ever be achieved, but confirming inflation would show us that the cosmos, at least, has figured out how to do it.