Wired has picked up on our Frontiers of Propulsion Science book with just published interviews of Marc Millis and Eric Davis, co-editors of the volume. Interviewer Sharon Weinberger had a tough assignment, dealing with a 739 page collection of technical and scientific papers aimed, as she notes, at scientists and university students. But her questions were well chosen, particularly in drawing out why a book like this was necessary. 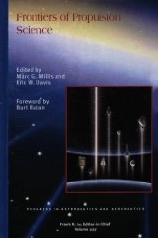 Marc Millis, founder of the Tau Zero Foundation, noted the need for a single, defining reference point outlining the current status of research and the opportunities presented. Thus the motivation:

To clear the way for progress, my colleagues and I decided to compile this one document covering the status, issues, and unresolved questions behind a variety of known concepts, and to link the ideal goals back to real physics details. To the extent possible, we endeavored to treat these subjects impartially; showing both their visionary relevance and their critical issues.

All of this is in the context of building a base for future work more than hawking the merits of any particular approach. Moreover, advanced propulsion studies needed a volume that identified the founding references that later work could build upon:

The intent was to create a document that other researchers could use as a reliable starting point for productive research – chipping away at the issues and unknowns that might one day enable practical interstellar flight.

The book emerges into an environment where the decision to re-play Apollo has seen cutbacks in the kind of fundamental research pursued by projects like Breakthrough Propulsion Physics, which Millis once headed at NASA. The situation is not new. Three times more private funding went into propulsion physics research in the late 1990s, Millis notes, than was supplied by government. The trick now will be to encourage private initiatives to publish their results widely, for the benefit of the entire community.

These are thorny matters in a field as prone to exaggerated claims as cutting-edge propulsion, but high-quality research that engages the scientific community through peer-reviewed journals is out there. Eric Davis notes the need for rigorous, lab-tested concepts of the sort he pursues at the Institute for Advanced Studies at Austin, and also as CEO of Warp Drive Metrics:

…there is no general hesitancy toward conducting experiments by scientists. There is a larger question that looms in this regard: “Does a particular concept have a rigorous hypothesis or theory worth testing in the lab?” This question addresses whether any concept is testable. According to the scientific method, experiment must be driven by hypothesis, or in absence of a hypothesis, one uses laboratory empirical studies to produce a hypothesis. There are an enormous amount of concepts floating around out there and most of them do not have a testable hypothesis. That makes it very difficult for any serious scientist to justify doing experiments.

Even those ideas that make the grade of testability can fail the test, as some of the concepts examined in Frontiers of Propulsion Science make clear. A serious-minded inventor with a breakthrough in mind will, if confronted with such evidence, go back to figure out where the problem is. But not everyone takes the scientific method so seriously, Davis notes:

Often, however, the inventor holds on to his original belief, attacks the independent evaluation process as being flawed, and continues to hype his claim, a sure indicator of the pathological science position that is not self-corrective. In this case, as time passes and no positive contribution to the energy field emerges, the process of independent evaluation becomes more and more appreciated as unbiased.

In Search of a New Model

Getting fewer sales pitches and more credible research is what interstellar studies needs, which is why Frontiers of Propulsion Science stands out (in the interest of transparency, I should note that I wrote the first chapter of this book, so consider me an interested party). Where we go next seems clear. NASA did support the compilation of Frontiers, but that was its last contribution to such research, with further support withdrawn as of October of last year. Now we turn elsewhere. A growing commercial space sector gives hope of private funding to support rigorous research. Driving the attempt is not, as Millis notes, the kind of Cold War tension that boosted Apollo, but today’s understanding that the very habitability of Earth is endangered.

Is the answer to Fermi’s ‘Where are they?’ question that technological civilizations simply cannot survive their growing pains? A culture unable to muster its defenses against space-borne impactors, facing the ever-present prospect of future war with advanced weaponry and contemplating environmental change may well wonder if survival is possible. Basic research into the options for getting off-planet is the kind of insurance policy it should create, if not governmentally, then by private initiative.

And that, in support of Tau Zero, is why this site continues.

Next post: EGR: A ‘Hail Mary’ Pass to the Stars