Thursday Launch for Herschel and Planck 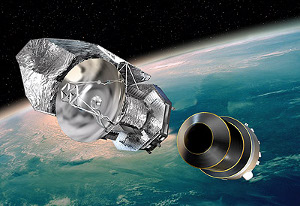 While we’re thinking about space telescopes like the aging but potentially repairable Hubble, let’s not forget the launch now scheduled for Thursday from the Guiana Space Centre in Kourou. The European Space Agency’s Herschel instrument will be lifted into an orbit 1.5 million kilometers from Earth, stationed at the second Lagrange point (L2) so that Sun, Moon and Earth can all be hidden behind a sunshade to afford the instrument a clear view without disturbance from its celestial neighbors.

Image: About 0.5 hours after launch, Herschel separates from the launcher upper stage and starts its cruise to L2 (the second Lagrangian point), situated at about 1.5 million kilometers from Earth. Credit: ESA/D. Ducros, 2009.

Along with Herschel goes Planck, also scheduled for the L2 point (the two satellites will separate shortly after launch and reach L2 independently). Herschel is the largest infrared telescope ever launched, with a 3.5-meter primary mirror made of silicon carbide that is almost one and a half times bigger than Hubble’s. Herschel’s ability to see into the early universe should be unparalleled, but for those of us thinking about future missions to the outer system, the telescope has uses much closer to home.

As close as 30 AU and beyond, in fact. The space beyond Neptune is offering us new chances to fill up our catalogs of astronomical curiosities, with some 1300 trans-Neptunian objects (TNOs) now known. These are cold objects that have changed little since the beginning of the Solar System, and are of considerable interest as we interpret what they mean about our own origins and what happens around other stars. Thus Thomas Muller (Max Planck Institute for Extraterrestrial Physics):

“The Herschel sample comes up to about ten percent of the currently known objects on the far side of Neptune. For the first time we can gain statistical information on the whole population, which then can serve as a reference for the interpretation of discs and remains of discs in other star planet systems.”

As to Planck, its 1.5-meter instrument will measure temperature variations in the early universe, monitoring the Cosmic Microwave Background (CMB) emitted 380,000 years after the Big Bang. This gets into all kinds of fascinating questions, such as the expansion of the universe and the nature of its acceleration. Computer simulations at the Max Planck Institute for Astrophysics have been able to show how the CMB is influenced by the gravitational field of dark matter, which means that analyzing Planck data with statistical methods can help us learn more about the structure of the cosmos. 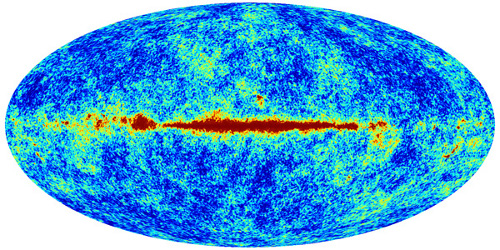 How galaxies form also comes into play through study of the Sunyaev Zel’dovich effect, the heating of CMB photons caused by their encounter with galaxy clusters. Both Herschel and Planck are powerful enough to guarantee deeper insights into such issues. Simon White, a colleague of Sunyaev’s at the MPA, calls the satellite “…the most powerful tool ever developed for studying the Cosmic Microwave Background.” Good fortune to both instruments on Thursday as they head into the black.