A Dark Matter Collapse near M87?

When we talk about the diameter of the Milky Way, it’s usual to cite a figure of about 100,000 light years. But the much more diffuse halo of stars surrounding the galaxy actually extends almost twice as far. You would expect to find more or less the same situation in other galaxies, but new observations of the giant galaxy M87 have turned up a surprising fact: Its halo of stars is much smaller than expected. It’s true that the halo is three times the size of that around the Milky Way, but its diameter of a million light years is still much smaller than anticipated given the size of the parent galaxy.

Mysteries like this seem just the thing for the weekend, so consider the possibility, raised in the paper on this work, that the truncated halo is the result of a collapse of dark matter in the Virgo Cluster, where M87 resides. The Virgo Cluster is approximately 50 million light years from us and contains hundreds of galaxies of all descriptions, including spirals like the Milky Way. Another possibility: A close pass by the galaxy M84, which could have perturbed M87 about a billion years ago. 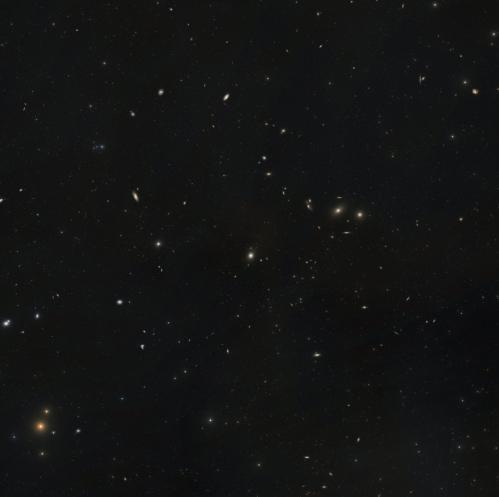 Image: The Virgo cluster of galaxies taken with the Palomar Observatory 48-inch Schmidt telescope as part of the Digitized Sky Survey 2. The giant elliptical galaxy Messier 87 is seen in the centre, while Messier 84 and 86 are the two bright galaxies forming part of the small group on the centre right of the image. New observations obtained with ESO’s Very Large Telescope have shown that the halo of stars around Messier 87 has been truncated, possibly because of some interaction with Messier 84. The observations also reveal that Messier 87 and 86 are moving towards each other. Credit: European Southern Observatory.

How to measure the motions of stars in the haloes of distant galaxies? Researchers in this study used a spectrograph on the European Southern Observatory’s Very Large Telescope in Chile to measure planetary nebulae on the outskirts of M87 and also in intergalactic space within the surrounding Virgo Cluster. Such nebulae show strong emission lines, making them easier to detect at great distances and allowing for precise radial velocity measurements. They offer clues to the number and type of stars in outer galaxy regions and help us account for their motions.

We don’t know that dark matter is the culprit here, but it’s interesting to note that similar effects believed to be caused by dark matter have been found in other galaxies, detected through gravitational lensing. The authors point out, however, that the data gathered to this point are insufficient to draw a conclusion between dark matter and other scenarios. Their thinking is that further study of planetary nebulae with a much larger sample will be needed to get an accurate picture of what is going on.

The paper is Doherty et al., “The Edge of the M87 Halo and the Kinematics of the Diffuse Light in the Virgo Cluster Core,” accepted for publication in Astronomy & Astrophysics and available online. More in this European Southern Observatory news release.