Radio Supernovae and the ATA

We think of the Allen Telescope Array, currently comprising only 42 of the 350 radio dishes planned, as a SETI instrument, capable of digging faint signals out of a wider field of stars than ever before. But the ATA is also engaged in an astrophysical survey of the sky at radio wavelengths, one that will look for radio bursts from supernovae. A glimpse of what it is looking for has just been reported in M82, a small irregular galaxy about twelve million light years from Earth.

We’re talking about a so-called ‘radio supernova,’ an exploding star undetectable by optical or X-ray telescopes. The new object is the brightest supernova seen in radio wavelengths in the last twenty years, and one of only a few dozen of its kind observed so far. And while the ATA will help us locate future radio objects of its kind, this one was found with the Very Large Array in New Mexico, and later confirmed through the NRAO’s Very Long Baseline Array. 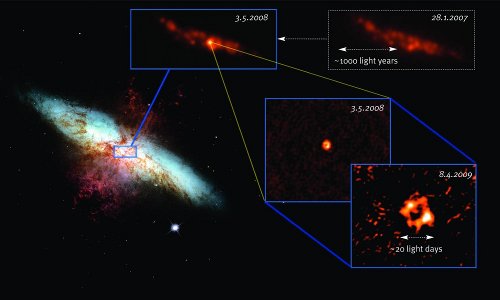 Image (click to enlarge): Zooming into the center of the galaxy M82, one of the nearest starburst galaxies at a distance of only 12 Million light years. The left image, taken with the Hubble Space Telescope (HST), shows the body of the galaxy in blue and hydrogen gas breaking out from the central starburst in red. The VLA image (top left) clearly shows the supernova (SN 2008iz), taken in May 2008. The high-resolution VLBI images (lower right) shows an expanding shell at the scale of a few light days and proves the transient source as the result of a supernova explosion in M82. Credit: Milde Science Communication, HST Image: /NASA, ESA, and The Hubble Heritage Team (STScI/AURA); Radio Images: A. Brunthaler, MPIfR.

Both the VLA and the VLBA have narrow fields of view, but the ATA will offer full-sky scanning on a daily basis, and will be able to find objects ten times fainter than this radio supernova. In the process, we’ll learn much about how radio supernovae work even as we continue the hunt for life around other stars. All of this should bring a more cohesive approach to the study of these objects, says Geoffrey Bower (UC-Berkeley):

“This supernova is the nearest supernova in five years, yet is completely obscured in optical, ultraviolet and X-rays due to the dense medium of the galaxy. This just popped out; in the future, we want to go from discovery of radio supernovas by accident to specifically looking for them.”

A supernova can produce radio emissions when it’s found in an active region of star formation, where the density of gas and dust is high — that very gas and dust is, of course, the reason why it is so hard to detect these objects in optical, ultraviolet and X-ray wavelengths. Those supernovae that have not lost large parts of their envelope before collapsing to form a neutron star or black hole produce few radio emissions.

The team has found indications of a ring structure produced by a shock wave around this object, one that has grown to about 2000 AU across and is consistent with a year-old supernova. Astronomers hope the emissions from these objects will offer up information about how stars explode and how their cores collapse. Debris colliding with the stellar wind should provide rich data to observers, while the ATA’s ongoing survey should take us deep into the realm of transient and variable sources.

The paper is Brunthaler et al., “Discovery of a bright radio transient in M82: a new radio supernova?,” accepted at Astronomy & Astrophysics and available online. More in this news release from the Max-Planck-Institut für Radioastronomie.