Antimatter’s allure for deep space propulsion is obvious. If matter is congealed energy, we need to find the best way to extract that energy, and our existing rockets are grossly inefficient. Even the best chemical rocket pulls only a billionth of the energy available in the atoms of its fuel, while a fission reaction, powerful as it seems, is tapping one part in a thousand of what is available. Fusion reactions like those in a hydrogen bomb use up something on the order of one percent of the total energy within matter. But antimatter can theoretically unlock all of it.

The numbers are startling. A kilogram of antimatter, annihilating with ordinary matter, can produce ten billion times the amount of energy released when a kilogram of TNT explodes. Heck, a single gram of antimatter, which is about 1/25th of an ounce, would get you as much energy as you could produce from the fuel tanks of two dozen Space Shuttles. This is the ultimate kick if we can figure out a way to harvest all this energy, but as particle physicist and author Frank Close (Oxford University) shows in his new book Antimatter (Oxford University Press, 2009), we’re a long way from knowing how to go about this. 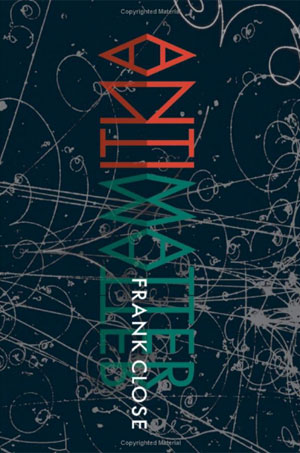 Close is a good, clear writer. Even the most abstruse parts of Antimatter — and that includes a thorny section on Paul Dirac’s use of the mathematical tools called ‘matrices’ to plumb the depths of antimatter’s role in the universe — are rendered forthrightly and understandably. And the conundrum of antimatter storage receives considerable attention. We can store the stuff in magnetic bottles but if we store positrons or antiprotons alone, we face the problem that like charges repel, which means we can’t put in large quantities (even if we had them) due to the repulsive forces that inevitably cause leakage. Neutral anti-hydrogen is also tricky because it is not responsive to the electric and magnetic fields we were hoping to use to keep matter and antimatter apart.

You can see what this does to our thinking about antimatter in spacecraft. We’ve got to find ways to store antimatter in quantity that aren’t themselves so heavy that they become a huge factor in total mass. Of Gerald Smith’s work at Penn State and, later, Positronics Research, Close is skeptical. In one Smith paper, the authors outlined the basics of a trap that would carry a billion antiprotons for ten days. This was meant to be a prototype of a trap that would carry 1014 antiprotons for up to 120 days, sufficient for a round trip Mars mission. There is much more in the Smith proposal, but Close sees little to recommend it, at least so far:

This appears to have been more a management plan of how one would approach such a challenge rather than any tested proven route to a new technology. Ten years later, nothing like this has been achieved, nor was any of the work at CERN devoted to such endeavours. The maximum number of antiprotons ever stored in a trap is a million, and the focus of current research is on containing small numbers for precision measurements.

And we also have to reckon with ways to produce antimatter in sufficient quantity. Right now the energy inefficiency is enormous. Says Close:

…since the discovery of the antiproton in 1955, with LEAR at CERN and similar technology at Fermilab, the total amounts to less than a millionth of a gram. If we could collect together all that antimatter and then annihilate it with matter, we would only have enough energy to light a single electric light bulb for a few minutes. By contrast the energy expended in making it could have illuminated Times Square or Piccadilly Circus.

At the current rate (maybe a nanogram a year costing tens of millions of dollars), it would take hundreds of millions of years and over $1,000 trillion to produce one gram of antimatter. Or try this out:

To make a gram of antiprotons you will need 6 x 1023 of them, while a gram of positrons would require 1026. The most intense source of antiprotons is at Fermilab, USA. Their record production over a month in June 2007 produced 1014 antiprotons. Were they able to do this every month for a year they could produce about 1015, which equates to 1.5 billionths of a gram, or nanograms. Were we able to retain all of these antiprotons and annihilate them with 1.5 nanograms of matter, the total energy released would be about 270 Joules, which is like five seconds illumination by a feeble light bulb.

No easy solutions in Close’s book. The antimatter rocket idea — annihilate antimatter with matter to produce gamma rays that heat a propellant before expelling it out the back of the rocket — sounds good until we reckon in the impracticality of storage and the current inability to produce antimatter in quantity. Antimatter is excellent at showing you the state of the art and where we may be heading in the near future, but it also reminds us of the need to modify our space concepts. Steve Howe’s fission-based ‘antimatter sail,’ for example, is built around the idea that we have huge constraints on antimatter production. 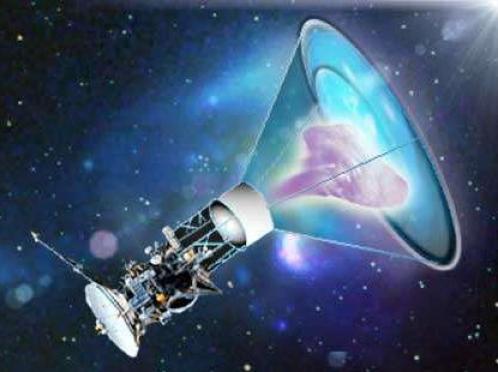 Think of a sail coated with a layer of uranium-235. A tiny amount of antimatter released from the spacecraft creates fission which kicks the payload to 116 kilometers per second, in Howe’s formulation of a mission to 250 AU. The key is the storage of antihydrogen, an antimatter atom consisting of an antiproton orbited by a positron, in the form of frozen pellets that evaporate as they drift toward the sail. We’re talking about a sail a mere fifteen feet in diameter, relying on antimatter for its punch.

Rather than thinking in terms of large storage tanks of the stuff, we’ll have to learn to work with what we’ve got or what we can harvest in the Solar System. That doesn’t mean that there won’t be future breakthroughs in production — at least, we can’t rule these out — but realistic antimatter work for the near term will have to involve ways to store tiny amounts in efficient containers and use them to catalyze other reactions. Steve Howe’s NIAC paper on the antimatter sail not only discusses a propulsion method but NIAC also has his report on ingenious storage options. Despite NIAC’s closure, we can still get the benefit of reports like Howe’s online.