Among the most interesting of the future missions now being weighed by NASA, TESS (the Transiting Exoplanet Survey Satellite) would help scientists using the James Webb Space Telescope know where to look for Earth-like planets around nearby stars. While the invaluable Kepler mission scans 100,000 distant stars, hoping to gain statistics on Earth-sized exoplanets, TESS would have a different aim, looking for transiting terrestrial worlds around only the brightest stars. A 2012 launch is possible if the mission is approved.

TESS… provides the cheapest, shortest, and most direct path to the actual characterization of a potentially habitable planet. Included in the 2.5 million brightest stars are a substantial number of M dwarfs. Detailed Monte-Carlo simulations indicate that there’s a 98% probability that TESS will locate a potentially habitable transiting terrestrial planet orbiting a red dwarf lying closer than 50 parsecs. When this planet is found, JWST (which will launch near the end of TESS’s two year mission) can take its spectrum and obtain resolved measurements of molecular absorption in the atmosphere.

If TESS is selected for flight, we’re literally just five years away from probing the atmospheres of transiting planets in the habitable zone.

You can see how these missions could work together. Roughly one in every 200 Earth-like planets would be available through the transit method, according to Oliver Morton in Found in Transit, a guest column that ran Wednesday in the New York Times. We need to know which nearby stars offer transits because we’d like to look at planetary atmospheres when backlit by the star. A new paper in Nature goes a long way toward showing how effective this method can be at revealing the existence of life.

The work comes from the Instituto de Astrofisica de Canarias (IAC), where scientists thought to study the phenomenon of starlight passing through a planetary atmosphere close to home. This so-called transmission spectrum can be observed from Earth’s surface by examining light reflected from the Moon during a lunar eclipse. This news release claims the result is the first measurement of the Earth’s transmission spectrum, and it’s a revealing one at that. 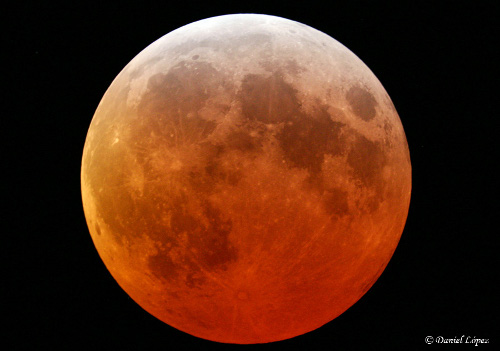 Image: The moon during a lunar eclipse. Earth’s transmission spectrum measured during such an eclipse shows strong signs of life. Credit:Daniel Lopez, IAC.

IAC’s Enric Pallé notes that the spectrum showed unexpectedly strong life signs, including methane and oxygen carrying a recognizable signature. Moreover, as theory suggested, light passing through a planetary atmosphere seems to carry much clearer data on the atmosphere’s chemistry than light reflected directly off the surface of the planet. Says Pallé:

“Now we know what the transmission spectrum of a inhabited planet looks like, we have a much better idea of how to find and recognize Earth-like planets outside our solar system where life may be thriving. The information in this spectrum shows us that this is a very effective way to gather information about the biological processes that may be taking place on a planet.”

Methane and oxygen, as Morton notes in his essay, have been studied since the 1960s in terms of their stability. James Lovelock, the English chemist who later developed the Gaia theory of the Earth as a single organism, was the first to realize that a spectroscopic analysis of chemicals in a planetary atmosphere could tell us whether life is present.

The key is instability, meaning that the oxygen and methane we find in Earth’s atmosphere react with each other. It takes life to keep these reactions happening. Without it, the atmosphere would show an unmistakable stability. But we can pick up chemical disequilibrium in an atmosphere readily, assuming the IAC work is on target, and that tells us how productive TESS could be as a finder mission for the JWST, which could turn its formidable resources loose on making the relevant observations.

Some other interesting notes from Morton’s essay:

No wonder we need transits, which in the case of an Earth-sized planet in front of a Sun-sized star, diminish the star’s light by about one twelve-thousandth. A tiny effect, but more than enough to measure and analyze. The paper, a significant one, is Pallé et al., “Earth’s transmission spectrum from lunar eclipse observations,” Nature 459 (11 June 2009), pp. 814-816 (abstract).