Meteorites are in the news in two starkly different ways this week, but I’ll lead with a story that has implications for how planetary systems like ours are born. Philipp Heck (University of Chicago) and colleagues have been analyzing interstellar grains from the Murchison meteorite, a large object that fell near the town of Murchison, Victoria in Australia in 1969.

The Murchison grains are thought to have been blown into space by dying stars long before the formation of Earth. We’d like to know more about such grains because they became incorporated into the earliest solids forming in the Solar System, and hence offer a window into that era. Moreover, their composition helps us understand a bit more about their history. “The concentration of neon,” says Heck, “produced during cosmic-ray irradiation, allows us to determine the time a grain has spent in interstellar space.”

The interstellar travel time for these grains, however, turns out to be less than expected, falling into a range between three million and 200 million years, less than half the previous 500 million year estimate for interstellar space exposure. In fact, of the 22 grains studied, only three lived up to the longer estimate. A period of intense star formation one to two billion years before the Sun’s birth, one that produced large quantities of dust, could account for the early incorporation of the grains.

Seen in one light, objects like the Murchison meteorite are storehouses of information about the early Solar System. Seen in another, they and their larger cousins form a class of dangerous objects that could pose a threat we need to anticipate. On that score, we have, until recently, studied incoming objects by using satellites built to detect nuclear bomb tests. They’ve done priceless double-duty, offering up data on asteroids and meteoroids entering the atmosphere. Leonard David points out in a recent story that most incoming objects are never seen from the ground because they fall over ocean or in broad daylight. 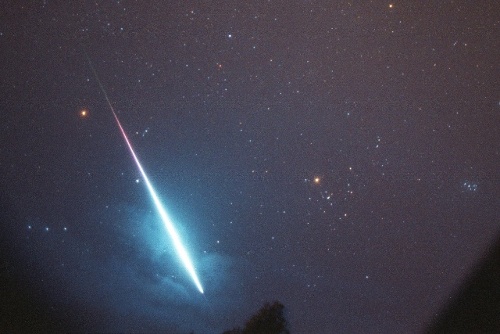 Image: A fireball over Norway in 1998. Credit: Arne Danielsen.

But data on incoming bolides are now being treated as classified, and that’s bad news for the study of future impacts. The asteroid 2008 TC3, for example, was the first case of an astronomical detection of such an object before it hit. Data on the subsequent fireball from surveillance satellites proved crucial in locating the impact zone of this object in the Sudan. Tracking smaller impactors is a key part of the overall plan to study and identify dangerous Near Earth Objects, so let’s hope the scientific community can make this case clearly enough to cause policy-makers to reconsider.