Huge Outburst from a Magnetar

We get yet another example of space-based observatories complementing each other with the recent outburst of X-rays and gamma rays detected last August. The Swift satellite first noted the event on August 22, while the European Space Agency’s XMM-Newton satellite began making detailed spectral studies of the radiation twelve hours later, followed by the Integral observatory. The outburst went on for more than four months, accompanied by hundreds of smaller bursts.

The source for these events was a magnetar, a type of neutron star that is the most highly magnetized object known, with a magnetic field some 10,000 million times stronger than Earth’s. The new magnetar, christened SGR 0501+4516, is of the type known as Soft Gamma-Ray Repeaters (SGR), and is the first such found in the last decade. Magnetars are known for spectacular periods of irregular burst activity, changing their luminosity up to ten orders of magnitude on timescales of just a few milliseconds. 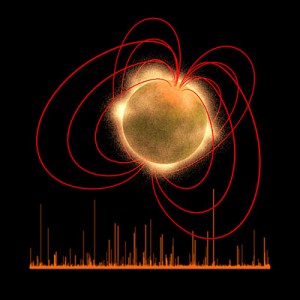 We occasionally discuss doomsday scenarios from nearby supernovae and the like, speculating on conditions that could limit planetary habitability, but in these troubled financial times, ESA’s own comparison may be even more dire. Speculating on what effect a magnetar at half the Moon’s distance from the Earth would have, ESA notes that its magnetic field would wipe the data off every credit card on the planet (more here).

Image: Illustration of a magnetar. Magnetars are the most intensely magnetized objects in the Universe. Their magnetic fields are some 10 000 million times stronger than Earth’s. Credit: NASA.

SGR 0501+4516, though, is about 15,000 light years away, unknown until the recent outburst. We still have much to learn about magnetars, including the crucial question of how they form. With only fifteen of them known in the Milky Way, competing ideas circulate, including the notion that a magnetar is the remaining stellar core of a highly magnetic star at the end of its life. The other suggestion involves the death of a normal star, its core accelerated in its last convulsions to provide a dynamo that strengthens its magnetic field. Both ideas are still in play.

Up next for SGR 0501+4516 is to observe it in a quiescent state, comparing these data with the results of the outburst. XMM-Newton will be on the case next year. The paper is Rea et al., “The first outburst of the new magnetar candidate SGR 0501+4516,” published online in Monthly Notices of the Royal Astronomical Society (June 12, 2009). Preprint available. Interesting to see that the paper suggests the distinction between SGRs and the other type of magnetar — Anomalous X-Ray Pulsars (AXP) — may not stand up to scrutiny. We may be on our way to unifying these sub-groups into a single family of magnetars.