Somehow I never thought of the IceCube neutrino telescope as a SETI instrument. Deployed in a series of 1,450 to 2,450 meters-deep holes in Antarctica and taking up over a cubic kilometer of ice, IceCube is fine-tuned to detect neutrinos. That makes it a useful tool for studying violent events like galactic collisions and the formation of quasars, providing insights into the early universe. But SETI?

Perhaps, says Zurab Silagadze (Novosibirsk State University), who notes that most SETI work in the past has focused on centimeter wavelength electromagnetic signals. Says Silagadze:

Here we question this old wisdom and argue that the muon collider, certainly in reach of modern day technology… provides a far more unique marker of civilizations like our own [type I in Kardashev’s classification… Muon colliders are accompanied by a very intense and collimated high-energy neutrino beam which can be readily detected even at astronomical distances. 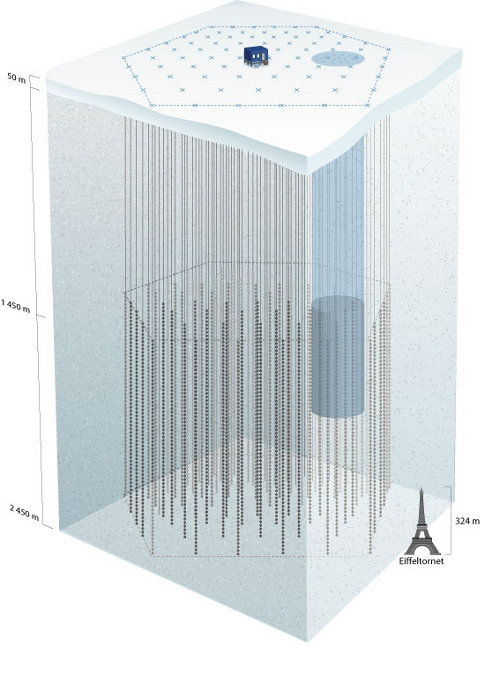 Image: The IceCube array in the deep ice, with Eiffel Tower suggesting scale. The dark cylinder is the AMANDA detector, incorporated into IceCube. Credit: NSF.

Muons are elementary particles that, like all such particles, have a corresponding antiparticle of opposite charge. Because they have no known substructure, muons and antimuons offer interesting opportunities for a collider. Their advantage over protons is that the effective collision energy is about ten times higher than for proton beams with the same energy. Moreover, muons are much heavier than electrons and produce less synchrotron radiation. You get higher energy levels with a cheaper collider that is shorter in circumference. Here’s a short backgrounder from Physics World on this.

So it makes sense that, if we can get around formidable practical challenges, we’ll eventually want to develop a muon collider. So, presumably, would an extraterrestrial civilization. And indeed, Silagadze discusses the practical uses of a high-energy neutrino beam in, for example, the study of the inner structure of a planet, or the use of collimated neutrino beams for communications. A 1979 paper by Mieczyslaw Subotowicz went so far as to argue that advanced cultures might deliberately choose neutrino channels for interstellar communications to shut out immature emergent civilizations from the ongoing conversation.

For that matter, is it possible that neutrinos could be used to set interstellar time standards? Note the following from Silagadze’s paper, which places these ideas in the context of the Kardashev scale for measuring the growth of technological civilizations:

Neutrino SETI was also proposed earlier with somewhat different perspective… It was suggested that type II (which have captured all of the power from their host star) and type III civilizations, spread throughout the Galaxy, may require interstellar time standards to synchronize their clocks. It is argued that mono-energetic 45.6 GeV neutrino pulses… produced in a futuristic dedicated electron-positron collider of huge luminosity may provide such standards. If there is an extraterrestrial civilization of this type nearer than about 1 kpc using this synchronization method, the associated neutrinos can be detected by terrestrial neutrino telescopes with an effective volume of the order of km3 of water…

IceCube, anyone? The beauty of neutrino SETI is that it can readily run in the background of concurrent neutrino-based astrophysical studies. Thus keeping an eye out for possibly artificial high-energy neutrino signals produced in muon colliders light years away makes a certain degree of sense. Will it succeed? Silagadze quotes Cocconi and Morrison’s classic paper: “The probability of success is difficult to estimate: but if we never search, the chance of success is zero.”