Back in my flying days, I found myself becoming absorbed with meteorology, enough to wind up teaching the subject in various flight school settings. I was no expert, but looking for clues on flying conditions in the next few hours by studying cloud formation and movement was fascinating. In all that time, the one cloud phenomenon I always wanted to see but never did was the noctilucent cloud, an unusual, lovely formation made up of ice particles that occurs at extremely high altitudes.

‘Noctilucent’ means ‘night-shining,’ and that’s just what these clouds do when they’re illuminated by sunlight from below the horizon. Space Shuttle launches have been found to generate them as the vehicle pumps about 300 metric tons of water vapor into the thermosphere, the layer of atmosphere beginning at about ninety kilometers above the surface, just above the mesosphere. Photographs of such clouds show a unique beauty, though it’s one that might also seem eerie, at least in certain settings. 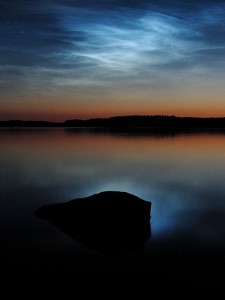 For just after the huge explosion that occurred in Siberia in 1908 night skies shone brightly for several days across Europe, particularly Britain, fully three thousand miles away. The Tunguska Event leveled 830 square miles of forest land and has been ascribed to various causes, but a new study concludes that the bright skies following the explosion are a clue to the true culprit, a comet. Those Shuttle-induced noctilucent clouds are the key.

Michael Kelley (Cornell University), who led this work, likens it to figuring out a 100-year-old murder mystery. Kelley thinks the evidence strongly supports the comet theory. Such a comet would have started to break up at roughly the same altitude as the release of the exhaust plume from the Space Shuttle. Moreover, water particles from launches have been found to travel as far as the polar regions, where they form noctilucent clouds after settling into the mesosphere.

The Shuttle plume, in other words, parallels what we would expect from a comet, but the wild card has been how water vapor could travel large distances without diffusing. We’re talking about moving this material thousands of kilometers, and quickly. Noting that there is no model that would predict this movement, Kelley calls the result “totally new and unexpected physics.”

Such new physics would involve, the researchers believe, so-called ‘two dimensional turbulence’ — counter-rotating atmospheric eddies packed with extreme energy, powerful enough that when the water vapor becomes involved with them, it travels at more than 90 meters per second. The problem is that the structure of winds in the boundary areas between the mesosphere and the thermosphere is not well understood. Noctilucent clouds may be giving us clues to the nature of this tricky region.

The paper is Kelley et al., “Two-dimensional turbulence, space shuttle plume transport in the thermosphere, and a possible relation to the Great Siberian Impact Event,” in press at Geophysical Research Letters. More in this Cornell University news release.