A Cometary Closeup for NExT

Apropos of yesterday’s story on the possible cometary origin of the Tunguska Event in 1908, Tau Zero journalist Larry Klaes looks at the NExT (New Exploration of Tempel) mission, which gives us a second crack at observing comet Tempel 1. Ancient artifacts of the early Solar System, comets can tell us much about its earliest days, but as Larry points out, getting data out of the Deep Impact mission proved to be unexpectedly complicated. NExT is a useful re-purposing of an earlier mission that may unlock further cometary secrets when it returns to Tempel 1 in 2011. If a comet did cause Tunguska, here’s hoping such events continue to be rare, but in the meantime, garnering all the information we can about how comets are made is as important for planetary security as it is for the study of Solar System origins.

An Impact to Remember

Late on the Fourth of July in 2005, while fireworks brightened the sky across the United States, another group of American citizens were making another type of explosion millions of miles away on a small alien world, a form of fireworks being done in the name of science. A robotic space probe, aptly named Deep Impact, lobbed a heavy copper ball at an ancient comet called Tempel 1, smashing into its surface and creating a crater over 300 feet across and almost 100 feet deep in the icy crust.

Mission members had hoped to peer into the crater they made with Deep Impact’s camera eyes to study the deeper and therefore older layers of Tempel 1’s surface. However, they were surprised to discover that the debris kicked up from the impact made a very fine dust cloud that hovered over the crater long after Deep Impact had left the vicinity of the comet, heading back into interplanetary space. 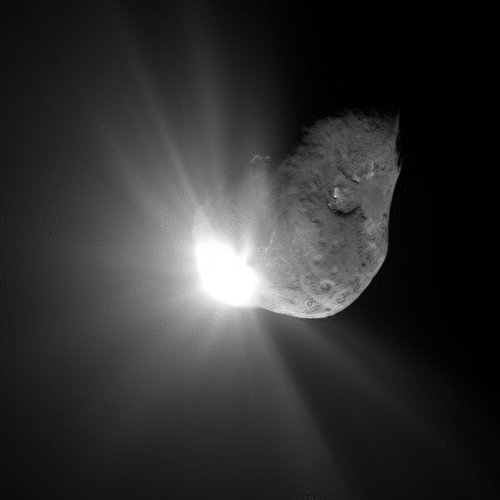 Meanwhile, another comet probe named Stardust was winding its way back home after successfully collecting particles from an ice ball named Wild 2 over one year earlier. Stardust would return those priceless samples of an alien world to Earth in early 2006 using a small capsule craft. Then Stardust, its primary mission complete, would swing back out into the void, presumably forever.

Thus the dilemma: Deep Impact had not been able to image the crater it made on Tempel 1 as originally planned and could not return to that comet, while Stardust became a still-functioning spacecraft with plenty of onboard fuel, but with nowhere to go. So some clever folks with the US space agency proposed to reroute Stardust to see what its sister vessel had actually done to Tempel 1 and achieve some other important science goals. NASA approved this mission on July 3, 2007 and Stardust was rechristened NExT, which stood for New Exploration of Tempel 1.

Though NExT will not encounter its cometary target until Valentine’s Day in 2011, mission scientists are already hard at work planning every little detail of the space probe’s one shot at Tempel 1 less than two years from now. Scientists from all over the country met at Cornell University on June 8 and 9 to discuss NExT with the astronomy department’s Joe Veverka, who is the Principal Investigator, or PI, for the mission and a veteran of space expeditions throughout the Solar System.

A New View of a Cometary Crater 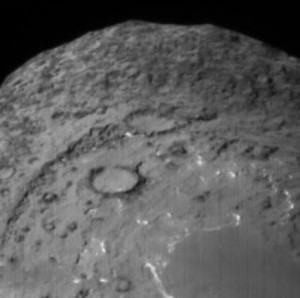 One of those who traveled far to be at this meeting was H. Jay Melosh, a professor of planetary science at the University of Arizona at Tucson. A former member of the Deep Impact team, Melosh is a renowned expert on impact cratering and is naturally quite interested to see what that probe did create on the surface of Tempel 1 almost four years ago.

“We want to get there when the crater made by Deep Impact is in view of NExT’s cameras,” says Melosh, who also emphasizes the importance of precisely timing when the robot explorer would fly by the comet. NExT will be moving so fast on its arrival day that the space probe will zip past Tempel 1 in just 20 minutes.

Image: Comet Tempel 1 just ninety seconds before the 2005 impact. The image was taken by the targeting sensor on Deep Impact’s impactor. Credit: NASA/JPL-Caltech/UMD.

Melosh and his team members also want to see how the comet’s surface may have changed both from the Deep Impact probe crash and natural cosmic effects during its five year orbit around the Sun. Although Tempel 1 is a fairly quiet comet compared to some of its more geologically active brethren, professional astronomers from around the globe monitoring Tempel 1 have noted that its 42-hour rotation rate has changed since humans first visited that little world in 2005. Melosh wants to know exactly how fast the comet is spinning on its axis now and when NExT arrives in 2011.

“Comets vent gas all the time,” explains Melosh, “so they have changing rotation rates as a result. Tempel 1 is a low activity comet, but its rotation rate still changed.”

On to Another Battered World

Though Melosh is now a geophysicist at his university’s Lunar and Planetary Lab (LPL), his first college degree from Princeton was in physics. When he attended Caltech in the early 1970s as a graduate student, Melosh became interested in glaciology and Earth science. He also got a chance to participate in the Mariner 10 space mission, the first vessel to encounter the planet Mercury. Melosh became fascinated with impact craters, which are widely found on this smallest of our system’s terrestrial worlds, during that time.

The scientist plans on exploring another battered celestial object in the near future with a mission labeled GRAIL, which stands for Gravity Recovery and Interior Laboratory. Launching the same year that NExT encounters comet Tempel 1, GRAIL consists of two identical craft that will study our Moon’s gravity field in detail both for science and to assist future lunar spacecraft navigating our neighboring world.