Look back far enough in time (and hence far enough in distance) and you see things that don’t correspond to nearby cosmic objects. The so-called ‘Lyman-alpha blobs’ that astronomers have found associated with young, distant galaxies are a case in point. Huge collections of hydrogen gas (some of them the largest single objects yet found in the universe), they’re bright at optical wavelengths, raising the question of what powers the glow and how they factored into the galaxy formation process. 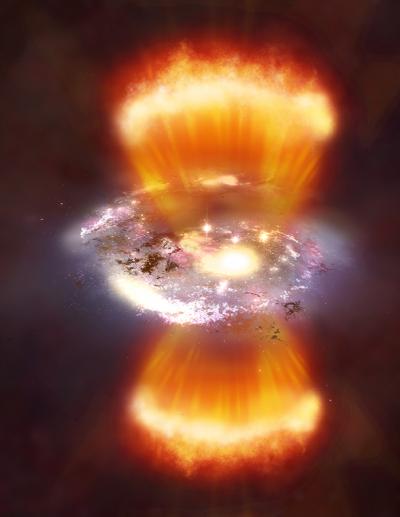 New research may be offering an answer. The key is something called ‘feedback,’ a stage in galaxy formation that shows the interplay between galaxies and the intergalactic medium. Here, the cooling of gas within the dark matter halos enshrouding a young galaxy is countered by heating from active galactic nuclei (think supermassive black holes), which helps to enrich intergalactic space and also slow down star formation.

Image: An artist’s representation showing what one of the galaxies inside a blob might look like if viewed at a relatively close distance. The spiral arms of the galaxy are seen in yellow and white. A two-sided outflow powered by the supermassive black hole buried inside the middle of the galaxy is shown in bright yellow, above and below the galaxy. This outflow illuminates and heats gas surrounding the galaxy, enabling this blob to be seen across billions of light years. Credit: CXC/M. Weiss.

The instrument at work here is the Chandra X-ray Observatory, which has pinpointed the effects of supermassive black holes that, even as they grow, are obscured by the dense layers of gas and dust around them. Also implicated as a power source is the contribution of intense star formation found in these regions. The Lyman-alpha blobs found in an area of sky known as SSA22 are produced by galaxies that are ending their era of rapid growth, and now offer us an insight into how galaxies form.

Bret Lehmer (Durham University, UK), a co-author of the paper on this work, explains the process:

“We’re seeing signs that the galaxies and black holes inside these blobs are coming of age and are now pushing back on the infalling gas to prevent further growth. Massive galaxies must go through a stage like this or they would form too many stars and so end up ridiculously large by the present day.”

Thus the radiation and outflows from black holes and bursts of star formation are powerful enough to illuminate the hydrogen gas of the blobs in which they reside. That’s no small feat, considering that these blobs of gas are several hundred thousand light years across. We’re looking at them at a time when the universe was roughly two billion years old. Rather than galaxies in their infancy, we are evidently seeing galaxy formation as it begins to move away from the period of early rapid growth.

Galaxies in their adolescence? SSA22 offers powerful evidence for that belief. That points to a future where, rather than forming stars, the gaseous blobs will contribute to the gas found between the galaxies. This striking stage of galaxy formation, so unlike the mature galaxies we see in later eras, offers clues to the still earlier era when the flow of gas is inwards and the infant galaxy cools as it emits radiation.

The paper is Geach et al., “The Chandra Deep Protocluster Survey: Ly-alpha Blobs are powered by heating, not cooling,” accepted by the Astrophysical Journal and available online. A Chandra X-ray Observatory news release is also available.