Back from Italy, We Turn to Nanotech 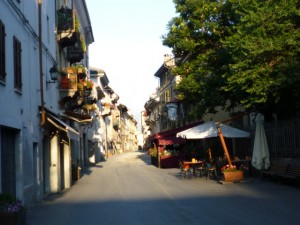 One of the things that makes travel both entertaining and exasperating is the assurance that the best laid plans will come up against events beyond your control. Thus I arrived at Milan’s Malpensa airport in plenty of time for my Delta flight, only to be told that the flight had been canceled. But Delta moved quickly on setting me up with an Alitalia flight to New York that left only thirty minutes after the first had been scheduled to leave, and after two more connections (and a twenty-three hour day on the move) I arrived back home. The photo is a shot of the streets of Aosta one early morning, from a walk I took on the last day to remember it by.

I returned with a satchel full of notes, the conference proceedings, numerous business cards and the world’s worst back-ache, a consequence of trying to move too fast in crowded airports with laptop and luggage. While the latter heals, I’ve also decided not to try to move through the Aosta material in one go — there’s too much of it, and too many papers I want to tell you about. So I’ll fold in the Aosta talks with a gradual return to other news items. Tomorrow, for example, I want to discuss a potential mission to Haumea, the curious object that may have much to tell us about the composition of the outer Solar System. So let me sort my notes and we’ll discuss it.

For today, a return to the news suggests a look at an article on the msnbc site discussing spacecraft at the nanotech level. This one caught my eye because of its reference to ‘needle-sized spacecraft.’ Robert Freitas was the one who told me about the ‘needle’ starship, a tiny vessel packed with nanotechnological assemblers that, arriving in a destination system, could use raw materials from asteroids there to build a scientific station for analysis and data return. I mentioned this idea in a recent Washington Post story, and in the current article, work at the University of Michigan using a new kind of thruster comes into play, with possible interstellar ramifications.

The technology is called a “nano-particle field extraction thruster,” or nanoFET. The tiny thrusters that work much like miniaturized versions of massive particle accelerators. The device uses a series of stacked, micron-thick “gates” that alternate between conductive and insulating layers to create electric fields. These small but powerful electric fields charge and accelerate a reservoir of conductive nanoparticles, shooting them out into space and creating thrust.

The engine is evidently etched onto silicon via micro-electromechanical systems technologies, with tens of thousands of accelerators fitting into a tiny area. Translate very small effects into constant acceleration over years of time and you could theoretically achieve something like the needle probe idea of Freitas, though Gilchrist does not talk about nanotechnology inside, but rather the propulsive force that will send the probe, whatever its payload. 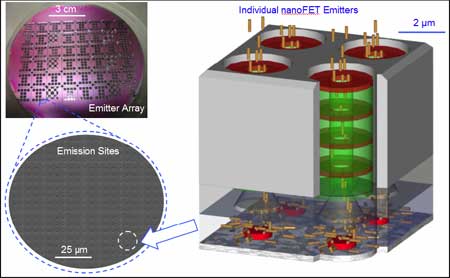 Gilchrist’s Web site at the University of Michigan shows a bibliography with papers related to this topic, but most are at least six years old — I assume the site just needs updating. But a university page on NanoFET propulsion offers more, describing the new electric propulsion system as a way to “….utilize electrostatically charged and accelerated nanoparticles as propellant. Millions of micron-sized nanoparticle thrusters would fit on one square centimeter, allowing the fabrication of highly scaleable thruster arrays.” Obviously not suitable for launch to orbit, these field emission thrusters are intended for acceleration and attitude control.

The page offers a look at how the system works:

Conductive nanoparticles would be transported to a small liquid-filled reservoir by a micro-fluidic flow transport system. Particles that come into contact with the bottom conducting plate would become charged and pulled to the liquid surface by the imposed electric field. If the electrostatic force near the surface can cause charged nanoparticles to break through the surface tension, field focusing would quickly accelerate the particles through the surface. Once extracted, the charged nanoparticles would be accelerated by the vacuum electric field and ejected, thus generating thrust.

So we now know to keep an eye on the Plasmadynamics & Electric Propulsion Laboratory at Michigan, whose concept would offer a highly efficient engine — and one with variable specific impulse — that should be scalable for a wide range of future space missions. nanoFETS are said to be able to adjust their specific impulse over a range from 100s to 10,000s with a high efficiency range throughout the entire specific impulse regime. A useful paper for learning still more about them is Liu et al., “Nanoparticle Electric Propulsion for Space Exploration,” American Institute of Physics 978-0-7354-0386-4/07, available online.

One more thing: The Plasmadynamics & Electric Propulsion Laboratory at Michigan offers an updated list of publications here, a number of which (particularly the conference references) relate to the nanoFETS concept.