It’s a lively Solar System indeed. In yet another confirmation of the value of amateur astronomy, Australia’s Anthony Wesley tipped off scientists on July 19 that a new object had struck Jupiter and observatories around the world zeroed in on the event. It comes exactly fifteen years after the ‘string of pearls’ comet Shoemaker-Levy 9 struck the giant planet. Infrared images show a likely impact point near the south polar region, visible in the image below. 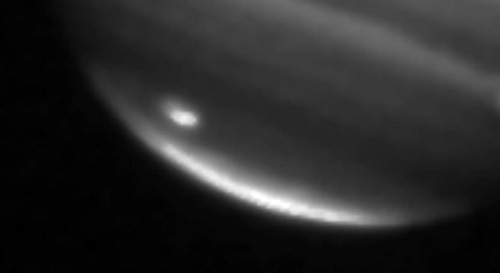 Unlike Shoemaker-Levy 9, this event may have been caused by a single object. UC Berkeley and SETI Institute astronomer Franck Marchis explains:

“The analysis of the shape and brightness of the feature will help in determining the energy and the origin of the impactor. We don’t see other bright features along the same latitude, so this was most likely the result of a single asteroid, not a chain of fragments like for SL9.”

It’s entertaining to note that UC Berkeley astronomer Paul Kalas, in Greece at the time, decided to use scheduled observing time on the Keck II telescope in Hawaii to investigate the Jupiter strike because he read about it on Marchis’ blog. So we have the astronomy world lit up by an Australian amateur making a find that’s quickly disseminated through various channels including weblogs, triggering quick and intense observing sessions with instruments worldwide. Hubble’s Wide Field Camera 3 will soon be on the case as well with visible and ultraviolet observations.

A planetary scar the size of the Pacific Ocean gets the attention, and should remind us, as did Shoemaker-Levy 9, that although the days of the Late Heavy Bombardment are long gone, there are objects wandering around the system that could end our civilization. The need for a mission to a near-Earth object to learn more about these impactors should be apparent, and it’s a technology driver for later deep space missions as well.