Cometary Catastrophe? Not So Fast…

Once again we’re asked to reconsider our views about the outer Solar System. In this case, the area in question is the Oort Cloud, which begins at roughly 1000 AU and continues, by some estimates, as far as three light years from the Sun. It’s a spherical cloud of comets, probably numbering in the billions of objects, most of which will never be observed because of their distance and faint signature.

Getting comets into the inner Solar System is necessary for closer observation, but it’s also risky for living beings. At least, that’s been the prevailing belief, given that comet collisions with Earth could theoretically produce extinction events. New research, however, has begun to challenge this view. Nathan Kaib (University of Washington) and doctoral adviser Thomas Quinn have developed computer models to study how comet clouds behave. 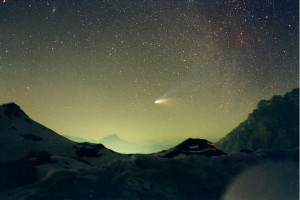 The simulations trace the evolution of comets over a 1.2 billion year period and allow the team to estimate the highest number of comets possible in the inner Oort Cloud. The team assumed the inner Oort Cloud as the source of long-period comets, those whose orbits take from 200 to tens of millions of years to make their way around the Sun (short-period comets originate in the Kuiper Belt — Halley’s comet is the most obvious example). 3200 long-period comets are known, with Hale-Bopp being the most recent.

The outer Oort Cloud is also a source for long-period comets, but by working with the assumption that the inner Oort was the only source, Kaib and Quinn could estimate the highest possible number of comets in that inner Oort region. The results cause them to doubt the case for comets as causes of planetary extinctions.

In fact, says Quinn, no more than two or three comets would have struck the Earth during the most powerful comet ‘shower’ of the last 500 million years. Three impacts occurred nearly simultaneously about forty million years ago, resulting in a minor extinction event that may have been the result of a comet shower. That event, notes Kaib, was the most intense in the fossil record:

“That tells you that the most powerful comet showers caused minor extinctions and other showers should have been less severe, so comet showers are probably not likely causes of mass extinction events.”

The results show the power of Jupiter and Saturn’s gravitational fields, which can cause comets to be ejected into interstellar space or drawn in for collisions with the gas giants themselves. We saw evidence for the latter just last week with an evident cometary impact on Jupiter. Those comets that do make it through the gravitational screening of the gas giants do not, by this thinking, stand as the culprits for major mass extinctions.

If Kalb and Quinn are right, we can relax a bit about comets, while asteroids remain a potential threat to Earth. The team’s work also tells us something about how cometary orbits are disrupted. Long-period comets from the inner Oort, according to the simulations, can emerge in the inner system without the nudge of a neighboring star as it passes close by the Solar System. The inner Oort thus becomes a livelier place than previously imagined.

The paper is Kaib and Quinn, “Reassessing the Source of Long-Period Comets,” Science Express 29 July 2009 (abstract).

Related: Be aware of JPL’s new Asteroid Watch site, which also tracks comets, offering the latest research on near-Earth objects and news about NEO discoveries and flybys. A Twitter feed is also available, along with RSS options and a downloadable widget.