A story on MIT’s Technology Review site looks at ion propulsion, and specifically at improvements made in the technology at Glenn Research Center. Comparing the recent work to the engines used in the Deep Space 1 and Dawn missions, the story quotes GRC’s Michael Patterson as saying, “We made it physically bigger, but lighter, reduced the system’s complexity to extend its lifetime, and, overall, improved its efficiency.” 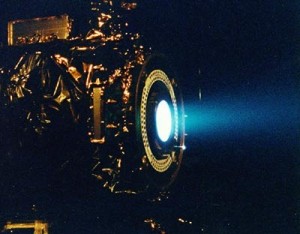 That’s good news, of course, and Patterson presented it to the AIAA’s Joint Propulsion Conference & Exhibit this week in Denver. With sessions on everything from Electric Propulsion Thruster Wear and Life Assessment to Advanced Propulsion Concepts, Denver was clearly the place to be for propulsion mavens. An entire session was devoted to the new ion thrust work, which goes under the name NASA’s Evolutionary Xenon Thruster (NEXT).

Quoting from an abstract of one of the talks:

The NASA NEXT thruster is engineered to be extremely flexible in terms of input power and specific impulse, while maintaining acceptable efficiency, and embodies a number of technological advances over previous ion engine systems.

Image: Follow the blue light. The xenon ion engine in this photograph was being tested in a vacuum chamber at the Jet Propulsion Laboratory. Credit: NASA/JPL.

Deep Space 1, launched in 1998, used an ion propulsion system that proved workable even if such engines produce only a tiny thrust. A continuous small push adds up, so one proof of concept was to keep Deep Space 1’s engine burning, which it did for 677 days (a spare of the same engine would later run for almost five years in NASA tests). The system used xenon gas released into a thrust chamber surrounded by magnets. The gas was ionized and expelled from the back of the chamber by electrically charged grids, demonstrating a method that, compared to chemical engines, yields ten times the thrust for the same amount of fuel.

So an ion engine is efficient, but the thrust is small. Used properly, however, the advantages of these systems are evident. Here’s an excerpt from a NASA description of the basic ion system, not yet amended to include the most recent NEXT work:

Modern ion thrusters are capable of propelling a spacecraft up to 90,000 meters per second (over 200,000 miles per hour (mph). To put that into perspective, the space shuttle is capable of a top speed of around 18,000 mph. The tradeoff for this high top speed is low thrust (or low acceleration). Thrust is the force that the thruster applies to the spacecraft. Modern ion thrusters can deliver up to 0.5 Newtons (0.1 pounds) of thrust, which is equivalent to the force you would feel by holding nine U.S. quarters in your hand. To compensate for low thrust, the ion thruster must be operated for a long time for the spacecraft to reach its top speed.

Deep Space 1 was only one of many ion thrust missions; in fact, testing on the basic concepts was begun in the 1970s. Since then, we’ve seen missions like Artemis (ESA), Hayabusa (an asteroid rendezvous mission by JAXA, the Japanese space agency), and Smart 1 (an ESA moon mission). The Dawn mission uses ion thrusters in its mission to the asteroids, while several other ion missions are now in progress.

The new ion engine builds upon the electric propulsion systems used by both DS1 and Dawn… It uses the same method to achieve thrust: xenon gas flows into a reaction chamber inside the engine and is ionized by electrons; electromagnets positioned around this chamber enhance the efficiency of ionization. Electrodes positioned near the engine’s thrusters (known as ion optics) are then used to accelerate the ions electrostatically and shoot them out of the exhaust to push the spacecraft forward.

Compared to earlier iterations, however, NEXT offers a larger throttling dynamic range, meaning it can operate for longer periods of time by adjusting power levels along the way. But the choice of destination says much about the problems these technologies face. Solar energy can power up an ion engine in the inner system, but it will take nuclear sources to keep one operational at the distance of the outer planets. The efficiencies involved in ion engines compared to the chemical alternative make resolving nuclear safety concerns an imperative.