Titan: A ‘Fishing License’ to Broaden the Hunt for Life

An exotic planetary environment right here in the Solar System may be a useful test for answering the key question of how common life is in the universe. So argues Jonathan Lunine (University of Arizona) in an upcoming paper. Lunine believes there is a plausible case for life to form on Titan, and that if we were to find it there, its very dissimilarity from Earth would make it a test-case for life in other extreme environments of the sort that may be common in the cosmos.

We’d like to answer this question locally because it may be some time before we can answer it around other stars. After all, the best spectral signatures we can hope to get from the atmospheres of Earth-analogues elsewhere are quite possibly going to be ambiguous. Molecular oxygen can be a sign of photosynthesis but also of the abiotic escape of water from the upper atmosphere. Methane in the same atmosphere makes biology more likely but may be, Lunine thinks, difficult to detect from Earth. 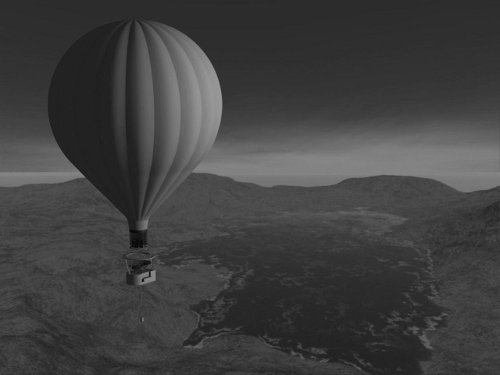 Image: One way to search for life on Titan. A Montgolfière, or hot air balloon, floats high above a methane-ethane lake on the distant world. A power source provides heat for buoyancy, which in turn is regulated by computer-controlled opening and closing of flaps on the balloon. Credit: Tibor Balint, JPL/Caltech, J. Lunine (UA).

Thus the utility of finding a second origin of life right here in the Solar System. And it’s interesting that Europa may not be as viable a candidate for this as Titan. Although Richard Greenberg in his book Unmasking Europa (Springer, 2008) has made a strong case for finding biological materials in the crustal ice and even on the surface through upwellings of oceanic water as the surface ice shifts, Lunine is skeptical:

…this assumes that organisms would be preserved in a recoverable fashion, and that the ice layers where such organisms exist would be cycled near enough to the surface to be sampled without being so close that the prodigious particle radiation would destroy the organic remains. Even so, delivery and operation of a vehicle designed for the surface of Europa, given the intense particle radiation flux from the Jovian magnetosphere, would be a challenge.

Enceladus, then? As with Europa, Lunine worries about the danger, however faint, of cross-contamination from Earth, even though radiation presents much less of a problem. But why take even the smallest chance of contamination via impacts from space debris (possibly carrying life from Earth, or even Mars) when Titan is available? There water is frozen out, to the point that even if there is a layer of liquid water beneath Titan’s ice crust, it is probably more than fifty kilometers deep.

Like Europa, Titan doubtless receives debris from hypervelocity impacts on Earth, but any surviving terrestrial life form should quickly perish in the cryogenic conditions there. But Titan’s lakes and seas of liquid ethane and methane could provide an interesting context for the development of an altogether different kind of life:

Methane and ethane have their own problems, including their non-polarity,
which means that as liquids they provide no support for molecular structures that depend on interaction with the liquid for their stability. But small amounts of polar molecules might exist in the Titan seas. Furthermore, an interesting “bio”chemistry might be built around the dominance of hydrogen bonding between organic molecules immersed in the non-hydrogen-bonding ethane and methane…, and in such a biochemistry, the low temperatures and consequent slow reaction rates are not necessarily a disadvantage…

Here Lunine is drawing on work by Steven Benner (University of Florida) and colleagues and goes on to summarize their conclusions:

Finding life of independent origin in our Solar System would radically revise our view of life elsewhere. Ponder this: While a planet around an M-dwarf at a distance that would allow liquid water would face problems like solar flares and tidal lock in developing its own forms of life, a planet 1 AU from such a star would be much like Titan, at a distance where liquid methane and ethane could survive on the surface. Were we to find life on Titan, we would extend the concept of a habitable zone to include that kind of environment, and because M-dwarfs outnumber stars like the Sun by a huge amount, we would have found the prospects for life that much more likely.

It could be argued, of course, that the planets around an M-dwarf might easily mimic Mars or Europa as much as Titan, but Lunine’s point is that in our system, only Titan offers both (relatively) easy access to the habitable environment of interest and an assurance that any life found there would by necessity be of an origin independent of Earth life. He calls Titan ‘a fishing license to broaden the search for planets around other stars’ from Earth-like worlds to those like Saturn’s huge moon.

The paper is Lunine, “Saturn’s Titan: A Strict Test for Life’s Cosmic Ubiquity,” accepted for publication in Proceedings of the American Philosophical Society and available online.