STEREO: Closing on the Lagrange Points

A note the other day from astrodynamics wizard Edward Belbruno (Princeton University) has put me in mind of the ongoing study of the L4 and L5 points being conducted by the STEREO mission. STEREO is a two-spacecraft observatory designed to study solar activity, but in September and October the craft will be making their closest approach to the two gravitational wells at L4 and L5, and it’s possible we’ll discover a resident population of asteroids in the process. If so, we may be looking at material from the birthplace of a long-gone planet.

Call this hypothetical world, as Belbruno does, Theia. We looked at this secondary mission for STEREO last February, but as Belbruno passed along a link to the 2005 paper on the subject of Theia for which he was lead author, it’s time to revisit it. The paper is a lively piece of work, noting that current thinking is that our Moon was the result of a giant impactor, a planetary-sized object that hit the Earth and produced debris that eventually formed the satellite. Formation from the iron-poor debris from the impactor’s mantle helps us explain the Moon’s low density relative to the Earth and also why the Earth and the Moon have the same oxygen-isotope abundances.

That impactor — Theia — is quite interesting. From the paper:

How does STEREO fit in? The spacecraft will be studying the Lagrange points because it is there that the gravitational pull of the Sun and the Earth balance out, as shown in the diagram below. Belbruno and co-author Richard Gott speculate in this paper that planetesimals could have been trapped in L4 and L5, leading to the accretion of a planet at one of these locations. They point to the Trojan asteroids at Jupiter’s L4 and L5 points and similar objects associated with Mars and Saturn.

Note in the diagram that L4 and L5 allow a unique balance of forces, as explained in the accompanying caption. 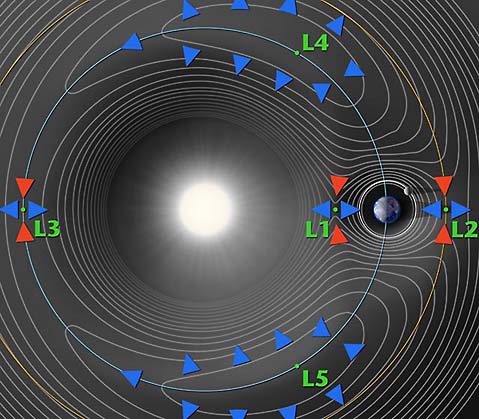 Image: In the above contour plot we see that L4 and L5 correspond to hilltops and L1, L2 and L3 correspond to saddles (i.e. points where the potential is curving up in one direction and down in the other). This suggests that satellites placed at the Lagrange points will have a tendency to wander off (try sitting a marble on top of a watermelon or on top of a real saddle and you get the idea). A detailed analysis confirms these expectations for L1, L2 and L3, but not for L4 and L5. When a satellite parked at L4 or L5 starts to roll off the hill it picks up speed. At this point the Coriolis force comes into play – the same force that causes hurricanes to spin up on the earth – and sends the satellite into a stable orbit around the Lagrange point. Credit: NASA/Neil J. Cornish (WMAP).

But although both L4 and L5 are stable, gravitational perturbations from other planetesimals could eventually cause Theia, our Mars-sized impactor, to escape. The paper examines the mechanisms by which this could happen in considerable detail, concluding with this scenario:

Debris remains at L4 (as the Trojan asteroids prove). From this debris a giant impactor starts to grow like Earth through accretion as described above. As the forming giant impactor reaches a sufficient mass (~0.1mE), it gradually moves away from L4 through gravitational encounters with other remaining planetesimals and it randomly walks in peculiar velocity. It gradually moves farther and farther from L4 approximately on Earth’s orbit in a horseshoe orbit at 1 AU, until it acquires a peculiar velocity of approximately 180 m s-1. The giant impactor then undergoes breakout motion in which it performs a number of cycles about the Sun, repeatedly passing near Earth. In a time span roughly on the order of 100 years, it collides with Earth on a near-parabolic orbit.

Thus STEREO’s ongoing task will be to look for evidence of asteroids at L4 and L5, ancient planetesimals that never became part of the impactor. As this NASA news release from last April notes, telescopic searches from Earth have turned up no such objects, but have only been able to rule out kilometer-sized asteroids. STEREO will be looking at much closer range. As the above diagram shows, the L4 and L5 Lagrange points are actually large regions of space (some fifty million kilometers wide, according to this NASA news release) so the examination will be lengthy.

Public participation is encouraged and you can get involved in the L4/L5 campaign here. Meanwhile, the paper in question is Belbruno and Gott, “Where Did the Moon Come From?” Astronomical Journal Vol. 129 (March, 2005), pp. 1724-1745, available online. More on asteroid detection and its attendant problems on Monday.