Gravitational Waves and their Limits

Sometimes what you don’t detect tells a scientific story just as important as what you do. In the case of LIGO (Laser Interferometer Gravitational-Wave Observatory) and the VIRGO Collaboration, we’re talking about setting limits to the amount of gravitational waves that would have been produced by the Big Bang. Those waves, predicted by Albert Einstein in 1916 and consistent with his theory of General Relativity, should be traceable and quite valuable to us, carrying as they do information about the earliest stages of the universe. 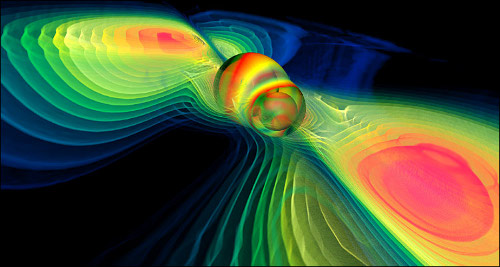 Image: Modeling gravitational wave complexity. Laser interferometers should be able to detect the gravitational waves produced by the most violent astrophysical events, such as the merging of two black holes. Credit: MPI for Gravitational Physics/W.Benger-ZIB.

The gravitational waves ought to be out there (General Relativity predicts that all accelerating objects should produce them) but they have yet to be observed directly. In fact, the so-called ‘stochastic background’ — this Caltech news release likens it to the superposition of numerous waves of varying strengths going in different directions on the surface of a pond — is what LIGO and the VIRGO interferometer are probing, looking into the universe as it was in the first minute of its existence. Lee Samuel Finn (Penn State) has a more colorful description:

“Space-time is the living stage upon which the drama of the universe plays out. The primordial stochastic gravitational waves are the warps, twists, and bends in space-time that were laid down as the universe expanded from its earliest moments to the present. The observations we report in this paper are the closest direct examination of the framework of the living, breathing universe.”

What we find in the new work, drawing on data from 2005 to 2007 and just published in Nature, is that the stochastic background of gravitational waves has yet to be discovered. But the data are precise enough that that fact is itself significant. It allows us to set upper limits on the phenomenon. Vuk Mandic (University of Minnesota) explains:

“Since we have not observed the stochastic background, some of these early-universe models that predict a relatively large stochastic background have been ruled out. We now know a bit more about parameters that describe the evolution of the universe when it was less than one minute old. We also know that if cosmic strings or superstrings exist, their properties must conform with the measurements we made — that is, their properties, such as string tension, are more constrained than before.”

The VIRGO Collaboration makes use of a three-kilometer long interferometer in Cascina, Italy and works with LIGO’s 700 scientists in jointly analyzing data gathered by various instruments, which include the GEO600 interferometer near Hannover, Germany. LIGO itself is composed of detectors in Hanford, WA and Livingston, LA, each using a laser beam split into two beams that travel down the interferometer arms.

The difference between the lengths of those arms should tell the tale, for General Relativity predicts that a passing gravitational wave should stretch one arm slightly while compressing the other. We’re talking about detecting a change of less than a thousandth the diameter of an atomic nucleus in the relative lengths of the arms. That’s enough to get us to today’s result, but Advanced LIGO, which comes online in 2014, is to be ten times more sensitive still, allowing us to probe various models of the early universe including those involving cosmic strings.

To place all this in perspective, recall that the Cosmic Microwave Background that has been so valuable in our studies of the early cosmos can take us back to about 380,000 years after the Big Bang. We’re now pushing into the investigation of early universe models that can take us back to the cosmos’ first minute. The paper, a joint work of the LIGO Scientific Collaboration and the Virgo Collaboration, is “An upper limit on the amplitude of stochastic gravitational wave background of cosmological origin,” Nature 460 (20 August 2009), pp. 990-994 (abstract).

Next post: A Stellar Gift to Education in Uganda