Back in April a paper appeared in the Astrophysical Journal that drew into question our view of star populations. We’ve assumed since the 1950s that we could count the stars in a particular area of sky by looking at the light from the brightest and most massive stars. In making this assumption, we were tapping the initial mass function, a way of describing the mass distribution of a group of stars in terms of their initial mass.

We could, then, estimate the total number of stars based on a sample of the stars that were the easiest to see, assuming that a set number of smaller stars ought to have been created in the same region. Every star twenty or more times as massive as the Sun should be accompanied, in this thinking, by about 500 stars of solar mass or less. But Gerhardt R. Meurer (Johns Hopkins University) and team used data from the Galaxy Evolution Explorer to challenge these proportions.

The numbers, it turns out, don’t work out as consistently as we had thought. Says Meurer:

“What this paper is showing is that some of the standard assumptions that we’ve had – that the brightest stars tell you about the whole population of stars – this doesn’t seem to work, at least not in a constant way.”

Many galaxies, this work shows, fail to form large numbers of massive stars, but continue to produce large numbers of their less massive counterparts. Indeed, for every massive star there may be as many as 2000 lower-mass ones, depending on the galaxy or region of sky being considered. 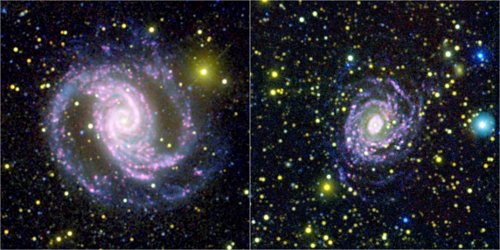 Image: Images taken with the Galaxy Evolution Explorer at shorter ultraviolet wavelengths are dark blue, while longer ultraviolet wavelengths are light blue. The optical images are colored red and yellow; red light is shown in yellow, while specially filtered red light from a type of hydrogen emission called H-alpha is colored red. By combining the data, astronomers were able to learn that not all galaxies make stars of different sizes in the same quantities, as was previously assumed. In other words, the proportion of small to big stars can differ from galaxy to galaxy. Credit: NASA/JPL-Caltech/JHU.

Ultraviolet images from the Galaxy Evolution Explorer were contrasted with filtered optical images from the Cerro Tololo International Observatory in Chile to obtain this result, the latter sensitive to the largest stars, the former to stars three times or more massive than the Sun. We thus gain a new way of estimating stellar populations, and are forced to re-evaluate galaxies that may be more crowded than we thought.

Previous post: A Stellar Gift to Education in Uganda