Here’s a surprise — a galaxy as large as the Milky Way that houses a supermassive black hole with the equivalent of a billion suns worth of matter. The surprise isn’t the object itself but its distance, some 12.8 billion light years (redshift 6.43). [See Adam Crowl’s comment below: This is not actually a ‘distance’ but the light travel time]. That makes this a young object, assuming a universe that began roughly 13.7 billion years ago, and has implications for how such galaxies form. Tomotsugu Goto (University of Hawaii), who led the team making the discovery, notes the unusual nature of his find:

“It is surprising that such a giant galaxy existed when the Universe was only one-sixteenth of its present age, and that it hosted a black hole one billion times more massive than the Sun. The galaxy and black hole must have formed very rapidly in the early universe.” 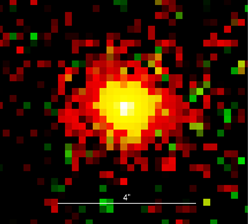 It seems odd to say it, but what complicates studying such distant objects is that host galaxies are often lost in the glare of the central black hole. The black hole emits no light, of course, but infalling material heated up by friction as it moves around the event horizon puts out a strong signature in visible and ultraviolet light. This University of Hawaii at Manoa news release notes that 40 percent of the light around 9100 angstroms comes from the host galaxy itself, while 60 percent is from the ionized materials around the black hole.

That light may make galaxy observations tricky, but it’s quite useful in the study of the central object. The amount of light emitted depends upon the mass of the black hole. Assuming a spherically symmetrical shell, the maximum brightness, called the ‘Eddington luminosity,’ allows us to calculate a maximum value for the mass. The huge black hole most likely formed from the merger of smaller black holes, of which the galaxy in question seems to provide a supply, but the formation mechanism is not fully understood.

The paper is Goto et al., “A QSO host galaxy and its Lyα emission at z=6.43,” to be published in Monthly Notices of the Royal Astronomical Society online edition, and currently available here.