Lightcraft: A Laser Push to Orbit

Not the least of the objections against using laser propulsion to boost a lightsail to the stars is the engineering required to build the system. But theorists like Robert Forward, who originated the laser lightsail idea, never thought we would simply create such a system from scratch. We might ask, then, in the area of laser propulsion, what ideas are being experimented with right now, and might be capable of development into more advanced designs?

Laser lightcraft command the attention here. Extensive work has been done on them at the Air Force Research Laboratory (AFRL), building upon earlier work at the AFRL Propulsion Directorate at Edwards Air Force Base. These early designs aim not at the stars, of course, but at a much more accessible target: Low Earth Orbit. A ground-based laser transmits power to the spacecraft, which collects the incoming energy and uses it to power its propulsion system. The beauty of this is that ambient air becomes the working fluid, allowing designers to leave the energy source on the ground. 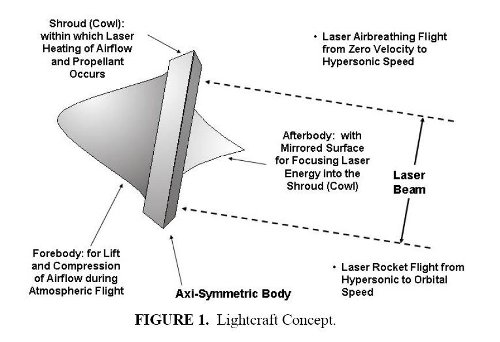 Several lightcraft concepts have been considered, as Eric Davis (IASA) and Franklin Mead (Propulsion Directorate, AFRL, now retired — see addendum below) make clear in a recent paper. In the one just mentioned, what happens aboard the lightcraft is interesting indeed. The lower portion of the vehicle is a highly polished mirror (see illustration above — both images in this post are drawn from Davis and Mead’s paper). The craft itself looks something like a fat acorn. Kilojoule pulses from the ground installation are fed to the vehicle at the rate of 25 pulses per second. The system now turns ambient air into something more useful, as the paper explains:

The laser beam’s pulse interacts with the mirror, spreading out and focusing into an annular area inside the circumference of the craft. The intensity of the 18 microsecond pulsed laser is sufficiently high that atmospheric breakdown occurs in the annular area causing inlet air to momentarily burst into a highly luminous plasma (10,000 – 30,000 K), thereby producing a superheated plasma shock wave (with instantaneous pressures reaching tens of atmospheres) that generates thrust in the direction of the laser beam. A lip around the craft’s circumference, akin to a plug nozzle directs the expansion of the plasma, creating downward thrust expansion. Multiple laser pulses and an atmospheric refresh of breakdown air generate the flight.

Flight on a Beam of Light

A lightcraft, then, flies on a beam of laser light, turning its energy into thrust. Earlier designs examined the concept from various directions, including one that used a heat-exchanger aboard the rocket and transferred the beamed energy in such a way as to heat a working fluid like hydrogen or ammonia that would be carried onboard. That produces thrust through expansion through a nozzle, much like a chemical rocket.

Another possibility is to carry an onboard solid propellant. But the latest incarnation of the lightcraft operates in dual mode, using air as described above (turned into a plasma by the laser) and then switching to laser thermal rocket mode at higher altitudes (above about thirty kilometers).

The latter concept, of course, demands a small onboard fuel supply, but nothing like the massive fuel/payload ratios we see in today’s rockets. We’re talking about a spin-stabilized, single-stage transportation system to orbit. In its ‘airbreathing’ mode, the engine pulses at a variable rate to achieve what the authors call a ‘quasi-steady thrust,’ one that depends upon the Mach number and altitude along the craft’s flight trajectory.

Have a look at a diagram showing how the system would work. The lightcraft switches into laser thermal rocket mode as it climbs above the atmosphere, using the only fuel it needs to carry. And get this: The lightcraft system as envisioned by Davis and Mead is capable of mid-air hovering and powered descent and landing. 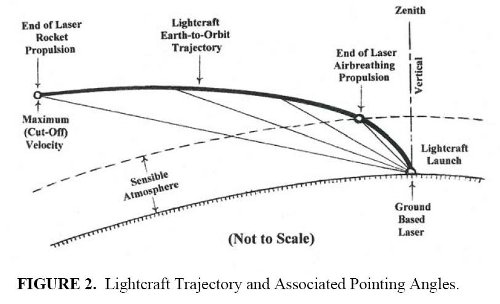 Cost? The ground-based laser installation, the AFRL study found, is the major expense of this transportation system, comprising about eighty percent of the total lightcraft system life-cycle cost. Launch costs as low as $74,141 per flight emerge from the studies, with estimated payload costs (using a 10 MW N2/CO2/H2 laser design) that should raise some eyebrows:

…a final total cost of $2,793 to launch a 5.25 kg payload to LEO. This new final result represents a cost of $532 per kg of payload (or $241 per pound) launched to LEO, which is 41 times lower than the space launch industry cost of $10,000 per pound for conventional chemical propulsion rockets.

The theoretical and experimental work already conducted by the AFRL Propulsion Directorate has demonstrated the practicality of the lightcraft concept. Tomorrow I want to run through some of the lightcraft’s other advantages, discuss the background of the idea (aerospace engineer Leik Myrabo has been working on this concept for thirty years), and consider where we are today. The paper is Davis and Mead, “Review of Laser Lightcraft Propulsion System,” CP997, Beamed Energy Propulsion, Fifth International Symposium (AIP, 2008), pp. 283-294.

Addendum: A note from a reader points out that Franklin Mead is now retired from the Air Force and pursuing research at his own company, Mead Science & Technology.