﻿The last time we developed a new way of reaching orbit was back in the 1950s. How useful, then, to come up with one that allows huge weight reduction because it leaves propellant and energy source on the ground. Keeping the fuel at home or harvesting it along the way are key ways to conceptualize missions to the outer Solar System or beyond. But in more immediate terms, laser-beamed lightcraft can give us a relatively inexpensive way to low-Earth orbit as we begin to build a true space-based infrastructure. 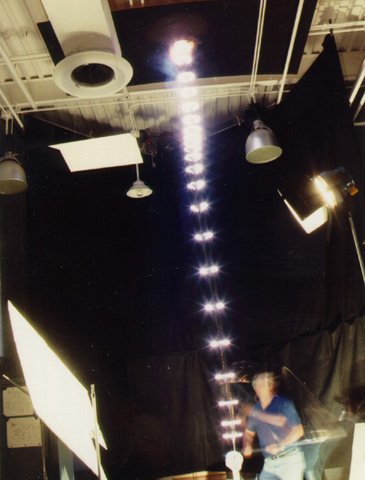 Eric Davis (IASA) and Franklin Mead (formerly of the Propulsion Directorate, AFRL, now retired and pursuing independent research) envision a ground-based laser beam generator system made up of power supply, laser beam generator/transmitter and related tracking, hand-off and safety systems. As we saw yesterday, the system would power an air-breathing pulsed-detonation engine that feeds off ambient air turned into plasma by the laser from the ground, producing a ‘superheated plasma shock wave (with instantaneous pressures reaching tens of atmospheres) that generates thrust in the direction of the laser beam.’ And we’re off, handing the thrust duties off to on-board propellant only when we climb above the atmosphere and switch to laser-thermal rocket mode.

The advantages of such a system are manifest. Moreover, they’ve been the subject of serious scrutiny for some time. The Strategic Defense Initiative Organization (SDIO) operated a Laser Propulsion Program that funded lightcraft studies in the 1980s, while in the following decade NASA MSFC and the Advanced Concepts Division of the AFRL Propulsion Directorate ran tests at White Sands. These early flights didn’t go very far (a lightcraft reached 43 meters in stabilized free flight), but don’t miss the significance, as Davis and Mead are quick to note:

This achievement can be compared to the first successful flights of Robert Goddard’s liquid propellant chemical rocket, which attained a height of 12.5 m after a 2.5 second burn in March 1926. In sharp contrast with Goddard’s rockets, there is absolutely no fuel on board the prototype Lightcraft, which has a diameter of 10 cm, mass of 20-40 g, and is machined from a solid block of 6061-T6 aluminum.

Five different Lightcraft designs have been flight-tested using the pointing and tracking system on the PLVTS laser. Current Lightcraft designs are limited to about 60 g mass and 15 cm in diameter by the PLVTS laser. A MW-class laser will be necessary for a kilo-class Lightcraft to reach orbit and components for these lasers exist, which would demonstrate the feasibility of this technology for low cost access to space.

You may be wondering why Davis and Mead capitalize ‘lightcraft’ in the passages above. Eric tells me that the Air Force owns the lightcraft concept and capitalizes the word in its reports. In any case, the benefits of lightcraft are clear. We’re talking single stage to orbit (try that with chemical rockets!), little on-board propellant (using the ambient air as the working fluid), and payload mass fractions running as high as fifty to ninety-five percent. We’re also talking about reducing costs by two to three orders of magnitude. The required laser beam power is 0.1 to 1 MW per kilogram of vehicle mass, and as the authors point out, “The ground-based MW-class laser beam generator is state-of-the-art technology.” The cost of generating the needed electrical power is $0.10/kWh, or less than $2 per kilogram of payload. 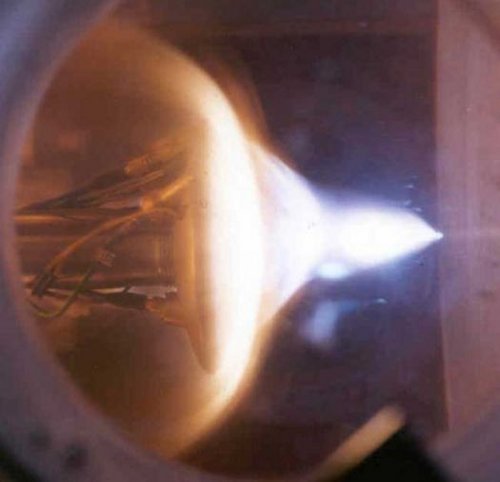 These are powerful advantages over existing systems. Leik Myrabo, who has been at the heart of this research throughout the process, and who operates a company called Lightcraft Technologies, talks about propulsion concepts taking 25 years to mature. “That time is now,” he told Leonard David in this article, which notes that high-power laser experiments are in the works at the Henry T. Nagamatsu Laboratory of Hypersonics and Aerothermodynamics at the IEAv-CTA in Sao Jose dos Campos, Brazil, a joint effort betwen the US Air Force Office of Scientific Research and the Brazilian Air Force.

Myrabo holds the world altitude record for lightcraft in free flight, in an experiment funded by a grant to his company that attained an altitude of 71 meters. What we’re now seeing are encouraging developments in a technology that may soon achieve far greater heights, one that could by its economics drastically change our limited launch capabilites. As Myrabo told Leonard David, “It’s a matter of will and do we want to do it. This technology is now at the cusp of commercial reality.” For more, in addition to the Davis/Mead paper (citation in yesterday’s post), see Myrabo’s Lightcraft Flight Handbook, LTI-20: Hypersonic Flight Transport for an Era Beyond Oil (Apogee Books, 2009).