Interstellar Beacons: A Silence in Heaven?

It seems fitting that we should be in the midst of a three-part series on SETI and METI issues. As Larry Klaes reminded me in a recent comment, September 19th was the fiftieth anniversary of the paper that began the modern SETI era, Morrison and Cocconi’s “Searching for Interstellar Communications” (available here). Artist, lecturer and polymath Jon Lomberg now adds his own take on the discussion. Pay particular attention to the question of signal duration — would a METI signal be continuous or intermittent? Much rides on the answer.

Lomberg is a familiar figure to Centauri Dreams readers. Creator of the Galaxy Garden (Kona, Hawaii), Jon is an astronomical artist working in many media whose work is known throughout the space community and beyond. Viewers of COSMOS will know that he was chief artist on that project, serving as Carl Sagan’s principal artistic collaborator for many years. His splendid work on CONTACT, where he storyboarded many of the film’s astronomical animations, showed what could be achieved in film with an adherence to scientific fact and solid conjecture.

Jon designed the cover for the Voyager Interstellar Record, the human artifact now pushing its way into true interstellar space. In other words, this is a man with experience at creating messages designed to reach out across vast gulfs of space and species. Here Jon adds to our discussion of SETI and METI with a look at what an interstellar beacon might be, and what it might be designed to do.

Let’s step back from the consideration of methods of transmission and the relative virtues of radio,optical, etc. The physics of these are well understood, so naturally it is the domain of search space that is easiest to study and manipulate. We can choose what kind of transmitters and receivers we will use. The only real progress in SETI has been the improvement of the sensitivity and bandwidth of the receivers. No doubt we will soon have the ability to monitor MOST of the radio/microwave spectrum at once. But perhaps that will not solve our problem of finding beacons.

What are the ideal properties of an interstellar beacon from a human perspective, whether sending or listening?

The most significant limiting factor of all METI done so far, as well as most attempted SETI strategies, is the “haystack” of duration (how long a beacon signal lasts) and the duty cycle (how often is it repeated). Even if we were so amazingly lucky as to reach a planet of radio-smart ETs , the chances of any of our METI transmissions being detected is small because the signals only last a short time and are not repeated. (Indeed, acquiring the signal a second time is the filter through which any possible messages must pass. All the various WOW signals we have heard have not). 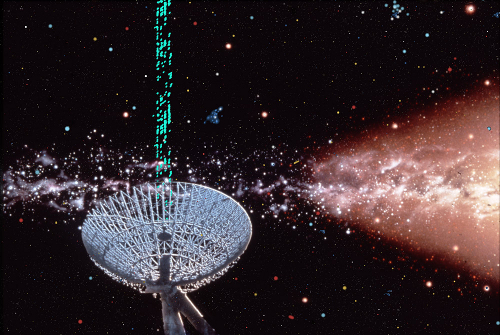 Image: Thinking about how a METI signal might be sent may cause us to re-evaluate our methods as we search for extraterrestrial intelligence. Artwork by Jon Lomberg.

Larry Klaes points out that sending uninterrupted powerful beacons is expensive. I would add to that annoying. Tests of tsunami sirens here in Hawaii are necessary but annoying, so they happen in my neighborhood only at 11:45 a.m.on the first Monday of each month. We want the tests and we want the test alarm to be very loud, but not happen too often.

A loud isotropic SETI beacon may temporarily inconvenience somebody doing something else in the society sending the beacon. Shielded, directed beacons are less problematic locally, but also impossible to detect if you are not in the beam. So short, powerful all-directional beacons on many wavelengths may be a better fit for societies living near their own beacon transmitters. Make a really loud noise only intermittently, but one very easy to spot for the time it is on the air, whatever instrumentation you are using to listen.

Duration and power seem inversely related: the briefer the transmission, the cheaper the energy. Is it better to have a very powerful beacon at the expense of length of transmission? A brief, very powerful burst could be detectable at much larger distances than a weaker one that lasts longer.

Duty cycle is the key variable. How long does a sender wait to charge up the capacitor (or whatever) before transmitting again? How often will the neighbors tolerate it? In my opinion, senders will likely opt for briefer and stronger beacons, because they are much easier to detect and reach many more potential targets while minimizing local inconvenience. Beacons must therefore be repeated– but at what interval?

Unless we can devise strategies that allow continuous monitoring of targets (or send repeated METI beacons ourselves) we could be looking in the right place at the right frequency– when they are off the air. Very strong, brief bursts simultaneously in many known wavelengths and “Z-waves” (Sagan’s generic term for methods we don’t know about yet) would reach the greatest diversity of searchers. Senders really interested in finding others would cast their net as widely on the EM spectrum as possible.

Uninterrupted continuity of observation is the strategy that is most likely to detect intermittent but powerful beacons. A new SETI strategy would use arrays of low-cost, small receivers to look in many selected “special” directions: nearby exoplanets, sunlike stars, galactic center/anticenter axis, etc. By passing off to receivers worldwide we sustain continuous searching without a lapse. Perhaps such a search could be piggybacked on home satellite dishes, like seti@home.

The reason I am unconcerned about any risk with current METI is that the very brief transmissions sent only once are probably too short to be detected, and in any case impossible for recipients to confirm with a second observation.

Long-lived civilizations will be patient civilizations. They will expect searchers to be patient as well. A patient search is not one constantly changing targets. It is choosing your direction of search and settling in to listen constantly until you hear something. Until we do that, it is premature to speak of any “silence in Heaven.”