Regarding METI and SETI Motives

I first talked to Jim Benford back in 2003, discussing his work (wih brother Gregory) on microwave beam propulsion. He had already run experiments at the Jet Propulsion Laboratory demonstrating acceleration on a lightsail using these techniques, and was then hoping to run an experiment on The Planetary Society’s ill-fated Cosmos 1. The founder of Microwave Sciences, Benford’s earlier work at Physics International led to the development of the largest high power microwave experimental facility in the country. Along with continuing work on sail beamed propulsion concepts, the physicist has been actively studying questions of SETI and METI, musing on the kind of beacons we might find and the motivations for building them. Herewith some thoughts inspired by recent discussions in these pages. 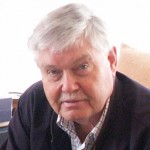 We explored the motives for a civilization broadcasting to the galaxy at large (which I call Beacons, as they’re not targeted at specific stars) in one of the two papers we did last year, which was extensively described on this site. It will be published soon in the archived literature, as but for now it’s at:

Through most of its history, SETI has assumed a high-minded search for other lifeforms. But other motives are possible. The categories of motivations as we described them:

What could motivate a Beacon builder? Here we can only reason from our own historical experience. Other possible high intelligences on Earth (whales, dolphins, chimpanzees) do not have significant tool use, so they do not build lasting monuments. Sending messages over millennia or more connects with our own cultures. Human history suggests (Benford G., 1999, Deep Time, Harper Collins, New York) that there are two major categories of long-term messages that finite, mortal beings send across vast distances and time scales:

Kilroy Was Here. These can be signatures verging on graffiti. Names chiseled into walls have survived from ancient times. More recently, we sent compact disks on interplanetary probes, often bearing people’s names and short messages that can endure for millennia.

High Church. These are designed for durability, to convey the culture’s highest achievements. The essential message is this was the best we did; remember it.

A society that is stable over thousands of years may invest resources in either of these paths. The human prospect has advanced enormously in only a few centuries; the lifespan in the advanced societies has risen by 50% in each of the last two centuries. Living longer, we contemplate longer legacies. Time capsules and ever-proliferating monuments testify to our urge to leave behind tributes or works in concrete ways (sometimes literally). The urge to propagate culture quite probably will be a universal aspect of intelligent, technological, mortal species (Minsky, Marvin, 1985, in Extraterrestrials: Science and Alien Intelligence (Edward Regis, Ed.), Cambridge University Press, also at http://web.media.mit.edu/~minsky/papers/AlienIntelligence.html). 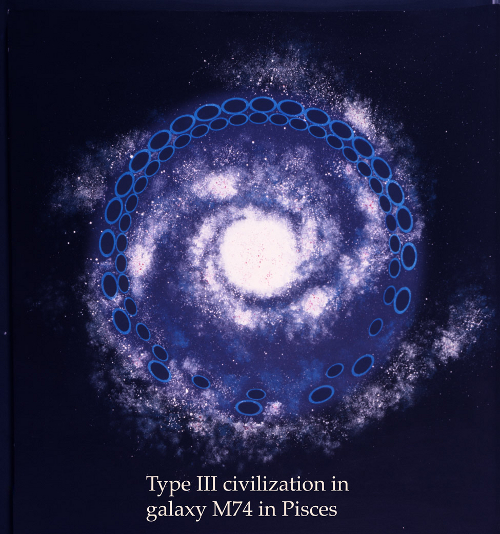 Image: A Kardashev Type III civilization imagined. Would a culture able to tap the vast power of its entire galaxy engage in beacon building? What can we imagine about its motives? Art by Jon Lomberg.

Thinking broadly, high-power transmitters might be built for wide variety of goals other than two-way communication driven by curiosity. For example:

The point is that there can be many motives, with two-way communication only one of them. The METI signals we’ve sent from Earth are detectable for only very short distances on the scale of the galaxy, typically a light year. Therefore, higher powers and larger antenna areas are required for serious Beacons.

All SETI search strategies must assume something about the beacon builder. Our other paper of last year (Benford, J., Benford, G., & Benford, D., 2009, “Messaging with Cost Optimized Interstellar Beacons”, arxiv.org/abs/0810.3966, submitted to Astrobiology) made the argument that whatever the motivations, the driver in building METI transmitters on such scales will be economics.

While cultural passions can set goals, economics determines how they get done. Many long-term spectacular projects, such as the pyramids of Egypt, lasted only a century or two and then met economic limits. The Taj Mahal so taxed its province that the second, black Taj was never built. The grand cathedrals of medieval Europe suffered cost constraints and, to avoid swamping local economies, so took several centuries of large effort. Passion is temporary, while costs constrain long-term projects.

So, we should look at cost as the limiting factor that will tell us things about what we should be looking for in SETI searches.