Heliospheric Crossings (and the Consequences)

Below you’ll see that I’m running Mike Brown’s sketch of the ‘new’ Solar System, one I originally ran with our discussion of Joel Poncy’s Haumea orbiter paper, which was presented at Aosta in July. The sketch is germane on a slightly different level today because as we look at how our views of the Solar System have changed over the years, we’ve learned how many factors come into play, including one Brown’s sketch doesn’t show. For surrounding the planets and nearer regions of the Kuiper Belt is the heliosphere, that bubble of solar wind materials whose magnetic effects help protect the inner system.

Image: Our view of the Solar System has gone from relatively straightforward to one of exceeding complexity. Credit: Mike Brown/Caltech.

Look at the heliosphere diagram below and you’ll see that while the eight planets are comfortably within it, our Pioneers and Voyagers are pushing toward or through the termination shock on their way to the heliopause. Galactic cosmic rays are shown pushing from deep space in toward the bow shock. Our new view of the Solar System must include the fact that the heliosphere does not extend to all of it. The Oort Cloud, that vast sphere of comets, is well outside it, and so would be those Kuiper Belt objects that wander too far from the Sun. 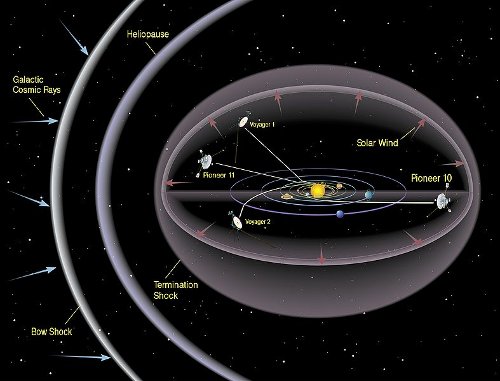 How about a future mission to Sedna? Better be careful, because this odd object moves out to about 990 AU at aphelion. Our intrepid astronauts, having solved the propulsion problem, would now face galactic cosmic rays without the helpful shielding effects of the heliosphere. Galactic cosmic rays are subatomic particles — protons and some heavy nuclei — that have been accelerated to high velocity by supernova explosions. They’re enough of a problem on the interplanetary level, but become even more of one beyond the system.

All this comes to mind because we’re seeing an increase in cosmic ray intensities, some 19 percent higher than what we’ve seen in the last fifty years, according to Caltech’s Richard Mewaldt, who adds “The increase is significant, and it could mean we need to re-think how much radiation shielding astronauts take with them on deep-space missions.” This NASA news release points to three culprits: a flagging solar wind, a decline in the Sun’s interplanetary magnetic field, and a flattening of the heliospheric current sheet where the polarity of the Sun’s magnetic field changes from a plus to a minus.

We’re safe enough where we are, of course, because the Earth’s atmosphere has allowed life to weather far worse cosmic ray fluxes. But if Mewaldt is right, we may have experienced a low level of cosmic ray activity for most of the space era. “We may now be returning to levels typical of past centuries,” says the scientist, reminding us how much we have to learn about the factors that make space flight within and without the system a hazardous enterprise.