Arecibo in Context: Watching for NEOs

Some things to keep in mind with regard to near-Earth objects: NASA is working with a Congressional mandate from 2005 that it discover ninety percent of all NEOs that are 140 meters in diameter or greater. The deadline for this task is 2020, and the interim report Near-Earth Object Surveys and Hazard Mitigation Strategies (written by a committee appointed by the National Research Council) says the surveys currently in progress are not capable of meeting this goal. The final report is to appear in December.

Now switch to Arecibo. The radio telescope there, run by Cornell University and the National Science Foundation, has run into serious funding questions. NSF must decide whether the current cooperative relationship between Cornell and NSF should continue, and whether the observatory itself should be funded. You may recall that an NSF panel recommended in late 2006 that Arecibo’s operating budget be reduced in a series of steps, ultimately taking it from $10.5 million to $4 million by 2011. Such reductions could close the observatory. 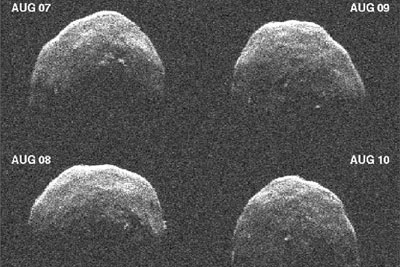 The role of Arecibo’s planetary radar in the NEO issue? That’s also spelled out in the interim report, which cites the observatory’s ‘unmatched precision and accuracy’ in detecting comets and asteroids that could hit the Earth. We still don’t know what’s going to happen with Arecibo, but the report certainly can’t hurt. Says Don Campbell (National Astronomy and Ionosphere Center):

“If the survey committee had not come out that strongly, it would have virtually ruled out any funding. [The report] was a necessary, but not sufficient condition to get funding from either NASA or NSF.”

Image: Arecibo Observatory radar images of asteroid 1992 UY4, which has a diameter of 2 kilometers, made from four days’ observation in August 2005. Credit: Lance Benner/Jet Propulsion Laboratory.

Short of sending a spacecraft to an NEO (itself a desirable outcome), the Arecibo planetary radar provides the best imaging and tracking for these objects that we have. We may argue about the likelihood of our planet being struck by any of these objects, but the idea that we would surrender this powerful tool for building and tracking the NEO inventory, now in place and functioning, seems incredible. We wait with guarded optimism to see how the funding picture develops for Arecibo. More in this Cornell University news release.