It’s odd to think that there would be a connection between the large-scale structure of the universe and what we hope to achieve with deep space propulsion. But figuring out how things work on the largest scale may offer us valuable clues about what is possible and what is not. If we understand correctly how gravity works at the macro scale, then the evidence for ‘dark energy’ seems persuasive. Something is causing the universe not only to expand but to accelerate its expansion, and that something must operate against the force of gravity, which ought to be slowing the process down.

Which brings us to BOSS, the Baryon Oscillation Spectroscopic Survey, now beginning its operations after taking first light on the night of September 14-15. A part of the Sloan Digital Sky Survey III, BOSS will use the 2.5-meter telescope at Apache Point Observatory in New Mexico to measure the spectra of 1.4 million galaxies and 160,000 quasars by 2014. Out of this we should derive the most accurate data yet about the way the universe is put together at the largest levels. Newly designed spectrographs will be doing the leg work, more efficient at working in the infrared than instruments used by the original SDSS. 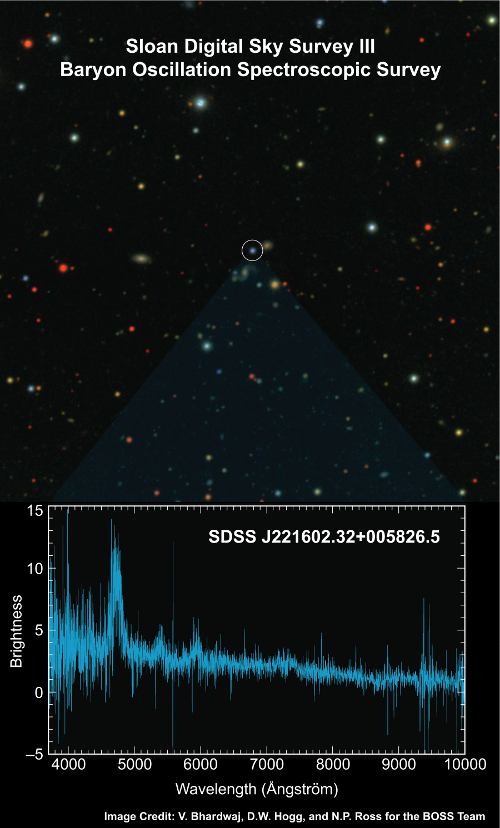 Image: One of the “first light” spectra taken by the Baryon Oscillation Spectroscopic Survey (BOSS). The top panel shows the targeted blue quasar, highlighted in the image of the sky, which are thought to be supermassive black holes in distant galaxies. At the bottom is shown the BOSS spectrum of the object which allows astronomers to measure the “redshift”, or distance to this object. BOSS plans to collect millions of such spectra and use their distances to map the geometry of the universe. Credit: D. Hogg, V. Bhardwaj, and N. Ross.

Where dark energy comes into play is that BOSS will be able to study the way protons and neutrons — baryons — interacted with light to create pressure oscillations. These, in turn, would have created variations in density as they traveled through the early universe, finally ceasing when the cosmos was about 400,000 years old as conditions cooled enough to halt their propagation. Nikhil Padmanabhan (Yale University) puts it this way:

“Like sound waves passing through air, the waves push some of the matter closer together as they travel. In the early universe, these waves were moving at half the speed of light, but when the universe was only a few hundred thousand years old, the universe cooled enough to halt the waves, leaving a signature 500 million light-years in length.”

That signature is found in the spacing of the galaxies BOSS will be measuring, whose distribution is described by Daniel Eisenstein (University of Arizona):

“We can see these frozen waves in the distribution of galaxies today. By measuring the length of the baryon oscillations, we can determine how dark energy has affected the expansion history of the universe. That in turn helps us figure out what dark energy could be.”

Galaxies, in other words, are more likely to be separated by about 500 million light years than 400 or 600 million light years, a spacing that scientists are calling a ‘frozen’ sound wave signature. That same structural effect should be seen in the clustering of visible matter in quasars and intergalactic gas as well, and should also have caused clumping in dark matter. What effect dark energy has had on this structure throughout the universe’s expansion should be apparent through the data that BOSS gathers as the project compares these scales at different eras.

Hard to believe that it was only in 1998 that firm evidence for dark energy first surfaced. We’ve been talking about it ever since and with more and more interest. Indeed, along with dark matter, it’s one of the great unanswered questions of physics. Now we can use a method beyond the supernova cosmology that revealed the universe’s acceleration in the first place, one that should complement these data and allow us to get a better handle on the dark energy phenomenon. Look for the first public data release from SDSS-III in December of 2010, yet another case of high-quality data becoming available for broad use on the Internet.

As to propulsion, there is simply no way to know what may come of all this. The continuing study of the universe’s structure may reveal clues to explain its acceleration without offering any helpful insights into exotic ways to push spacecraft. One of the tenets of the Breakthrough Propulsion Physics project all along was that the investigation of matters like these was not only helpful in working out propulsion strategies, but also in sharpening our understanding of physics in exotic realms like these. We gain, then, in deepening knowledge of the physics involved even if dark energy’s seeming ‘anti-gravity’ turns out to be explained by other means. Let’s see what BOSS has to say.