A Surprise at the Termination Shock

Findings that are outside our expectations seem par for the course as we explore the Solar System. From the volcanoes of Io to the geysers of Enceladus, unusual things show up with each new mission. Why should IBEX be any different? The Interstellar Boundary Explorer is the first spacecraft expressly designed to study what happens at the edge of the Solar System, where nearby space meets the interstellar medium.

The ‘bubble’ around the Sun called the heliosphere comes about as charged particles in the solar wind move continuously away from the Sun. Although IBEX is far from the heliopause (it’s orbiting the Earth with an apogee of 322,000 kilometers and a perigee of 16,000 kilometers), its instruments are tuned to study energetic neutral particles (ENAs) swept up by the solar wind in the boundary between the edge of the heliosphere and interstellar space beyond. IBEX has been mapping this area since last October.

“The IBEX results are truly remarkable, with emissions not resembling any of the current theories or models of this never-before-seen region. We expected to see small, gradual spatial variations at the interstellar boundary, some ten billion miles away. However, IBEX is showing us a very narrow ribbon that is two to three times brighter than anything else in the sky.”

Image: Accurate timing of the incoming ENAs allows the IBEX team to obtain a higher resolution in the latitudinal direction. The inset at right shows some of the fine detail of the ribbon. Credit: SwRI.

Yes, we’ve got two Voyager spacecraft out there, but IBEX is giving us the big picture, imaging the region not with photons but ENAs from its distant vantage in a highly elliptical Earth orbit. It’s focusing on the so-called ‘termination shock,’ where the solar wind collides with interstellar gas. As they pass through the region, neutral hydrogen and oxygen atoms are dragged by the plasma at the interstellar boundary, while neutral helium passes straight through. Tracing their different arrival directions tells the tale.

“The most astounding feature in the IBEX sky maps — the bright narrow ribbon — snakes through the sky between the Voyager spacecraft, where it remained completely undetected until now.” 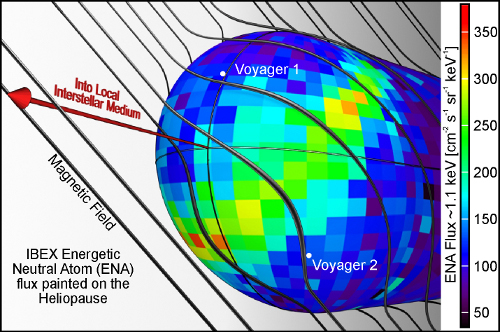 Image: This image illustrates one possible explanation for the bright ribbon of emission seen in the IBEX map. The galactic magnetic field shapes the heliosphere as it drapes over it. The ribbon appears to trace the area where the magnetic field is most parallel to the surface of the heliosphere (the heliopause). Credit: SwRI.

We’re learning that our Solar System’s interactions with the interstellar medium are more intense than previously believed. As helpful as Voyager’s point measurements are, we now see the region far more clearly. And because the ribbon these data reveal seems to be governed by the direction of the local interstellar magnetic field, it appears that the interstellar medium has a much greater influence on the heliosphere than we originally thought.