Sankar Chatterjee (Texas Tech) and a team of researchers have been looking at something known as the Shiva basin, that area west of India that is heavily laden with oil and gas resources. Chatterjee believes the Shiva basin is in fact a huge, multi-ringed impact crater, one caused by a bolide perhaps as much as 40 kilometers in diameter, big enough, as the scientist says, to create its own tectonics. The supposed dinosaur killer impactor in the Yucatan, by contrast, is thought to have been between eight and ten kilometers wide. Is Shiva basin the crater left by the actual extinction event?

Mostly submerged, Shiva’s outer rim forms a 500-kilometer ring with a central peak extending some three miles from the ocean floor. One result of such a strike, if the team’s theories hold up, is that the volcanic eruptions at the nearby Deccan Traps may well have been enhanced, not to mention the ensuing formation of the Seychelles Islands, which would have broken off the Indian tectonic plate. We’ll learn more about this theory when the team goes to India to look at rocks from the center of the presumed crater. Says Chatterjee:

“Rocks from the bottom of the crater will tell us the telltale sign of the impact event from shattered and melted target rocks. And we want to see if there are breccias, shocked quartz, and an iridium anomaly.” 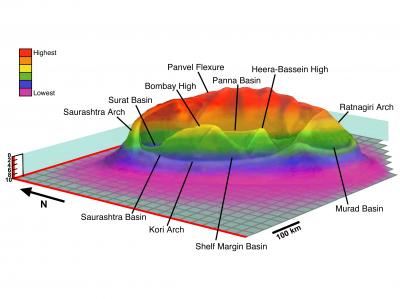 Image: This diagram shows a three-dimensional reconstruction of the submerged Shiva crater (~500 km diameter) at the Mumbai Offshore Basin, western shelf of India from different cross-sectional and geophysical data. The overlying 4.3-mile-thick Cenozoic strata and water column were removed to show the morphology of the crater. Credit: Sankar Chatterjee, Texas Tech University.

On a similar note, I see that a new title focusing on the Tunguska event is coming to our shelves, and let’s hope it attracts the interest of people still unaware of the power of such impacts. The Tunguska Mystery (Springer, 2009) works through the various investigations into the nature of the impactor, and from the press release I’ve seen notes the urgency of solving the asteroid vs. comet question, given our need to protect against future strikes. The author, Vladimir Rubtsov, has been a prolific writer of popular science articles published in Russia and internationally.

I hasten to add that I haven’t seen this one yet, but I’ll update this note when I’ve had the chance to page through the book. From the Amazon site I learn that Dr. Rubtsov “…joined the laboratory of Dr. A. V. Zolotov in Kalinin (now Tver), where for three years [he] studied the problem of the Tunguska explosion.” That was back in the 1970s, and was followed by a doctoral thesis with an interesting title: “Philosophical and Methodological Aspects of the Problem of Extraterrestrial Civilizations.” We’ll see how the scientist pulls together current thinking on Tunguska, the nature of whose impactor strikes me as less of a mystery than a fairly well constrained scientific question still in the process of being solved.